Opposition Forum for Democratic Change (FDC) has noted that the on-going country tours by President Yoweri Museveni to promote wealth creation are wastage of taxpayers’ money and will only lead to creation of a poor and vulnerable population.

The concern was raised by the party Spokesperson, Ibrahim Semujju Nganda while addressing the media during the party’s weekly press briefing at the party headquarters in Kamapala.

The party mouthpiece noted that FDC is concerned by the amount of taxpayers’ money that President Museveni is spending on the tours which are only another campaign project.

“While officially Mr. Museveni allocated himself a whole Shs 31.6 billion for inland travel under vote 002 (State House) during the financial year 2018, he processed through Parliament an additional Shs 17.5 billion to specifically finance these useless campaign tours,” Semujju said.

Semujju said that additionally, in a supplementary request made in May 2019, Museveni also requested for Shs 15.7 billion for classified expenditure under his residence.

“This means, he has officially spent Shs 33.2 billion just on tours in three months. Of course, everywhere he has gone, he has been bribing councilors with Shs 300,000 transport refund who in return are required to pass a resolution declaring him sole Presidential candidate/life president,” Semujju said.

Semujju noted that the country knows that Operation Wealth Creation which Museveni declared on June 9, 2014 and is now five years, has been as disastrous as all his earlier campaign slogans such as Entandiikwa, Modernization of Agriculture and Prosperity for All (Bonna Baggagawale).

“This is because the aim was never to help the population out of poverty. Today, more than 70% of the population is still producing for the stomach (subsistence),” Semujju said.

The opposition chief whip instead suggested that Museveni considers investing the Shs 33.2bn into an agricultural bank which would benefit many farmers, since farmers have perennially complained about access to credit for production, lack of water for production, limited access to market, inadequate storage and processing facilities leading to poor-harvest management. 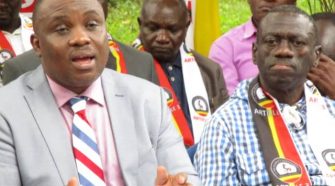