Opposition political party, Forum for Democratic Change (FDC),  is yet to find a suitable presidential flag bearer who will represent the party in the 2021 general elections upon rumors that their four time flag bearer, Dr. Kizza Besigye is weighing the possibility of not participating in the race.

The party had earlier set July 30th and 31st for members to pick expression of interest forms to run as presidential flag bearer but this was later revised to 3rd and 4th owing to the fact that on Friday 31st, the Muslim community would be celebrating the Eid festival.

The exercise of picking nomination forms that was supposed to kick off on Monday morning has however been postponed sine die on claims that the party hasn’t been given clear guidelines by the National Electoral Commission on how to conduct the party Delegates Conference.

“Fellow citizens, I announce to you the postponement of the Presidential flag bearer nomination exercise. I want to remind the national Electoral Commission to effectively respond to pertinent issues arising out of electoral affairs,” announced the party Electoral Commission Chairperson, Toterebuka Bamwenda.

Bamwenda said that after the release of the revised roadmap, the party communicated to EC about their intention to hold presidential flag bearer elections which would call for holding of the party Delegates Conference.

Bamwenda noted that in their communication, they indicated that their candidates vying for the party presidential flag would require to hold town hall meetings as well rallies hence the need to be issued clear guidelines on how to hold the said activities without contravening with the set COVID-19 Standard Operating Guidelines.

The party leader added that EC promised to furnish the party with the guidelines that would enable political parties to carry out internal campaigns and holding Delegates Conference but these haven’t been provided up to now.

“Without clear guidelines from Electoral Commission, it has been found necessary to postpone the Presidential flag bearer roadmap as the party National Executive Committee (NEC) sits to take a decision on Friday 7th August, 2020,” Bamwenda revealed.

It should however been noted that last month, Parliament approved and passed guidelines that would be followed by all political parties in conducting internal electoral activities in the prevailing circumstances of the COVID-19 pandemic.

According to these guidelines, Political parties were advised to consider extension of the term of office of current leaders in case the party finds out that it can’t hold the activities without contravening the Public Health Act.

The same method would be used in determining party flag bearers on different political seats were party leaders can sit and choose a flag bearer.

On the other note, the party has also advised the different district election supervisors to use one week to identify and nominate candidates for the newly created 47 constituencies. 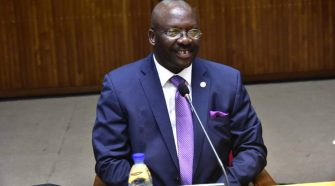