In the cover story, Janet Museveni reveals her rise above support to her husband President Yoweri Museveni, to a First Lady that serves her community in her own right and the challenges this presented.

“For a long time, I agreed with that perspective. I supported my husband for the largest part but the change came and I felt called upon to directly serve the people myself,” the First Lady told Forbes Woman Africa Magazine in an interview.

“I have always wanted so much to be able to participate directly to serve the people. It was not understood initially, but eventually people realized that First Ladies also have the right to serve their country in their individual capacity,” she explained.

“That’s how I came out and started something different, not just as the First Lady but as a Ugandan woman, to serve the people I believed I owed it to”.

In the issue, Janet Museveni discusses a wide range of issues including her role in founding of the Uganda Women’s Effort to Save Orphans (UWESO), her involvement in the fight against HIV/AIDS and shares her thoughts on Uganda’s future.

Renuka Methil, Editor Forbes Woman Africa explained that the exclusive interview which was done a month before Uganda celebrated its 55th independence will be as insightful to readers as it was for her.

“As Uganda looks forward to reviving its economy, it is pertinent to note the importance of the country’s women in this path to progress. We spent an afternoon with the First Lady in the lush lawns of State House talking to her about her years in exile and role as one of Africa’s foremost First Ladies,” Renuka Methil notes.

Forbes Woman Africa is a bi-monthly pan-African publication that navigates the world of business for women, with features on the latest trends in the corporate sector and how its architecture speaks to women.

The magazine profiles the trailblazers, game changers and pioneers among the women involved in business, the economy of Africa and the world.

It has previously featured the First Lady of Rwanda, Jeannette Kagame and President of Mauritius on its cover. The magazine will be available at various retail outlets in Uganda from December 9, 2017.

Why Mugabe-Like Downfall is Impossible in Museveni Led Uganda - Mwenda 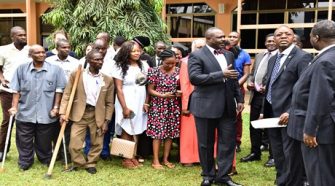