Police in Gulu on Tuesday night arrested for youth for staging a protest over the new Gulu district headquarters.

They allegedly blocked Gulu –Kitgum highway from Cwero trading center and burnt tires in protest that the new Gulu district headquarters has been taken to Awach Sub –County, and not Cwero trading center as earlier on pointed out by a Technical Committee and later approved by Gulu District Executive Committee.

Jimmy Patrick Okema, the Aswa River Region Police Spokesperson told our reporter that police were tipped off by concerned citizens and immediately a team of anti –riot police was dispatched from Gulu Central Police Station to the scene. Six bullets were fired to disperse the protesters before arresting some of them.

According to Okema, the suspects who are currently recording statements at Gulu Central Police Station shall be charged with mounting a illegal roadblock and inciting violence. He adds that more suspects are yet to be arrested as investigation into the matter is ongoing.

The District Executive Committee then approved the findings of the Technical Committee saying Cwero should host the new district headquarters.

His motion was then seconded by Christopher Opiyo Ateke, the councilor representing Awach Sub-county who then amended that the voting should be through a secret ballot. In his prerogative, Speaker John Okwanga subjected the house into voting by secret ballot.

In the first round of voting, Cwero and Awach drew with six votes each, followed by Ajulu in Patiko Sub-county and Paicho sub-county with five and zero votes respectively.

Awach then emerged the new district headquarters in the re-run after beating Cwero with nine votes to eight. 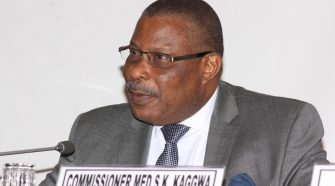