Renowned Ugandan born international musician, Geoffrey Oryema who has been living in France has died.

Reports that emerged on Friday evening state that the singer died in France where he has been living.

While the actual death is yet to be confirmed by the hospital where he was admitted, his family members say he had been battling with cancer for a long time. He had died at age 65.

“Mr. Gerald Omony, on behalf of The Greater Family of Lyelli Mzee Erinayo Oryema, wishes to inform you with deepest sorrow, the sudden loss of their beloved uncle, an internationally renowned Ugandan musician, Ladit Geoffrey Oryema that occurred this afternoon in France where was resident,” his family in Uganda said in a statement obtained by SoftPower News.

“Uncle Geoffrey had been battling cancer for quite sometime. The Greater Family will keep the community and all informed of developments as this sad news has just come in,” the statement by Mr Gerald Omony who is Geoffrey’s paternal uncle further reads.

His death comes just a year and a half since he made a homecoming trip to Uganda his country of birth. On December 17 2016, Geoffrey Oryema landed at Entebbe International airport after 40 years in exile. At the time, he described the trip as a joyous moment filled with mixed emotions.

During the trip, he revealed his plans to return to Uganda to settle and “celebrate my country”, but unfortunately this could not come to happen.

Geoffrey Oryema has been living in France for over four decades having fled Uganda after the death of his father, Erinayo Oryema in 1977. His father was a Minister in the government of former President, Idi Amin.

In France, Geoffrey settled, learned French and embarked on the journey to grow his already established music career that has began during his exile in Kenya.

He incorporated the traditional music of Uganda with the western music of the 80s.
He would later be introduced to eminent producer Brian Eno wh helped him record his debut album ‘Exile’, that was based on Geoffrey’s experiences as a youth in Uganda. It earned him wide acclamation as a singer and song writer.
One of the landmarks he registered was when in 1990, he performed at the Nelson Mandela concert, An International Tribute for a Free South Africa, held at Wembley Stadium in the UK.

Geoffrey Oryema was born in 1953 in Soroti, Uganda. His father was a politician who rose to the rank of minister and his mother was a director of the national dance company called The Heartbeat of Africa.

His family was immersed in Uganda’s traditional cultures and were storytellers, poets and musicians, which is largely inspired him as a teenager to write songs and play the guitar, flute and lukeme (a metal thumb-piano).

Geoffrey Oryema studied acting at the Uganda’s Drama School of Academy. He later founded an African drama company, Theatre Limited, the first Academy of Dramatic Arts and professional theatre troupe of its kind in East and Central Africa in the 70s. 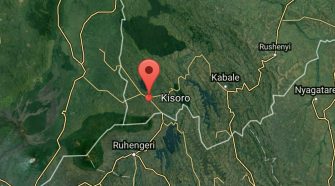