With only two weeks to the Awards gala, organizers of the annual Young Achievers Awards have unveiled this yearâ€™s nominees, and a host of young Ugandan trailblazers have made it to the list.

The announcement was made at an event held at Kampala Serena Hotel on Wednesday.

Among the nominees is singers Eddy Kenzo and Rema Namakula, Ugandaâ€™s gold medalist in the recent Commonwealth Olympic games, Joshua Cheptegei and inventor of ‘Matibabuâ€™, Brian Gitta who won a continental award for his outstanding innovation in the diagnosis of malaria.

Abaas Mpindi, the founder of Media Challenge Initiative who recently got a mention from former U.S President, Barack Obama during the Nelson Mandela 100th anniversary lecture, as being among young people causing positive impact on the continent, is also nominated for the Award.

Humphrey Nabimanya, the Team Leader at Reach a Hand Uganda (RAHU), a youth-led organization that puts together the Awards said that this yearâ€™s nominations received over 300 applications.

A hectic process overseen by a panel of 16 judges then narrowed down the list to the top 45 finalists in 9 categories each carrying 5 finalists.

Nabimanya said the judging process at every level “was totally transparent and entailed a set of expert judges in the respective fields/categories who used their proficiency to determine who the top 5 finalists in each category would be”.

“These 45 young people are defying odds and changing the narrative that Ugandan youth despite being faced with a lot of challenges like lack of access to employment, are at the center of creating employment opportunities for their peers,” headded.

He said that with Uganda boasting a majority youthful population, celebrating youth who are contributing to the positive development of Uganda empowers, gives guidance and support to the youth whose efforts are rarely recognized in other aspects.

“Giving youth such a privilege encourages them to push their ideas and businesses”.

Humphrey Nabimanya himself is an awardee of the same Awards, which he received in 2011 for his role as host of a teensâ€™ TV show.

The Awards now in their 7th year, will also recognize the Young Achiever of the Year, Young Hero/Heroine of the Year and Lifetime Achiever.

Criteria for nomination is based on the idea, the uniqueness of the idea, its impact to society as well as whether the particular individual (nominee) is the founder and whether he/she is between the age of 18 to 35.

Beyond the accolade, RAHU has been able to connect awardees to further opportunities such as funding and scholarships. Last yearâ€™s winners got seed funding from government through the Ministry of Trade worth Shs 45m as a whole.

3 Ugandans Shot and Robbed, Another Kidnapped by Assailants ‘in Congolese Army Attireâ€™ 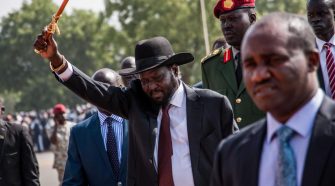