Government through Ministry of Agriculture and other agencies have so far cleared 15 hectares (37 acres) and 40 acres of floating islands in Jinja and Portbell respectively, according to an update given Friday by Hellen Adoa, the Minister of State for Agriculture, Animal Industry and Fisheries.

The Minister said this while visiting Masese landing site in Jinja, to update the fishing community there on the progress of government’s efforts to address the threat of floating suds.

Increasing water levels in Uganda have led to many floating weeds; some in form of floating islands and commonly referred to as suds which affected Nalubale hydropower dam, some bridges and landing site infrastructure in different parts of the country.

Heavy equipment was deployed at the Nalubale Dam including long arm excavators, dump trucks, self-loading trucks, barges, vessels and ferries, to facilitate the exercise of harvesting any remains of weeds/suds for the safety of Nalubale dam.

According to Minister Adoa, a total of 15 hectares of weeds have been harvested in Jinja areas of Masese, Kirinya and Wairaka. This excludes the over 6 acres previously harvested at the dam.

This has been done with support from the Arab Republic of Egypt and Ministry of Works and Transport and UPDF Marines.

Similar heavy equipment was deployed at Port Bell, and so far, about 40 acres of weed have been harvested. 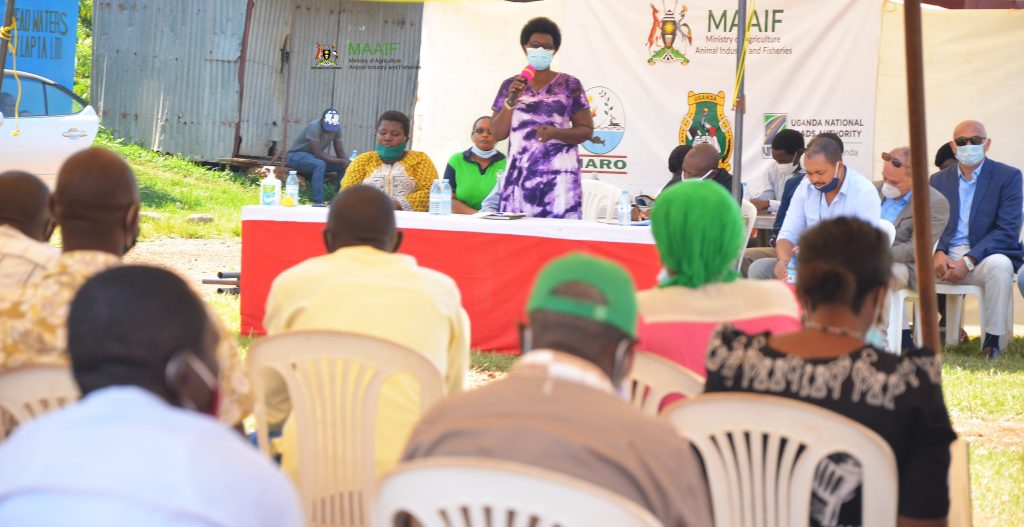 Other agencies involved in the exercise include Uganda National Roads Authority (UNRA), Mnistry of Works and Transport, Ministry of Water and Environment, Ministry of Energy and Mineral Development, Ministry of Defense - UPDF, Ministry of Internal Affairs (Police and Prisons), Eskom (U) Ltd and National Agricultural Research Organization (NARO) among others.

The Ministry also conducted drone based imagery surveys in Murchison Bay (Port Bell) and one in Jinja area and Buvuma in a bid to keep a close watch on the floating islands movements and guide machine deployment to right targets.

There are also other problem areas where many floating islands are roaming and these include Bunjako Bay (Mpigi/Kalungu), Sango Bay and River Kagera (Kyotera), and Fielding and Thruston Bays (Jinja/Mayuga)..

“The floating islands are a danger to hydropower generation, and have also affected ship transport at Portbell, blocked fish landing sites and bridges, affected fishing activities including interfering with fish breeding, and are a hiding place for fish men doing illegal fishing practices,” the Minister said.

The Minister Adoa told reporters that in Jinja, the threat has been minimal, explaining that ferry operations are 50% free of interference and that there is less interruption on fish cage activities

She warned people still using land near lakes and swamps to stop.

“We shall combine efforts with Ministry of Water to ensure human activity does not repeat this problem. Let us have what God has given us intact. The more we tamper with it, the more we cause problems to ourselves,” she said.

However, during Friday’s engagement, representatives from the Masese cage fish farmers raised concerns on the sluggishness by the technical teams in dealing with some of the floating suds. They said that in some cases, the teams have neglected the suds which have later caused damage to their business.

Kudere Philemon, the Vice Chairperson of Masese Cage Fish Farmers Cooperative Society said; “We are not opposed to efforts to deal with suds that threaten the dam. But we have concerns on the approach which has not allowed for consultations with us the community”.

“When the teams were harvesting the sud at Kirinya, there was another floating sud about 3-acres that crashed our fish cages. We have approached the technical officials on two separate occasions when suds have a disrupted us here at Masese but they have ignored them. They seem to only care when the suds are a threat to the Kuderudere said.

The Minister promised that concerns will be handled but also asked residents to raise such issues with all the stakeholders including the district authorities.

Similarly, Feni Luvuyo the Eskom Technical Director assured the community that Eskom teams work 24 hours daily and they will always respond timely to alerts on suds since the process of extracting the suds in case they get into the turbines is tedious but also causes significant disruptions on electricity transmission. 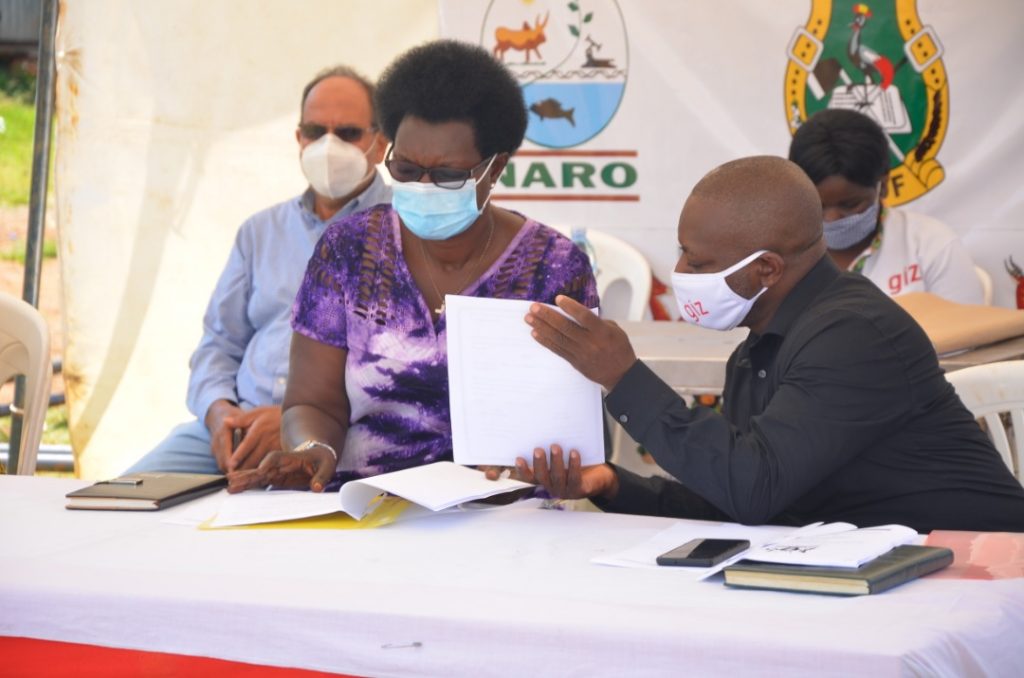 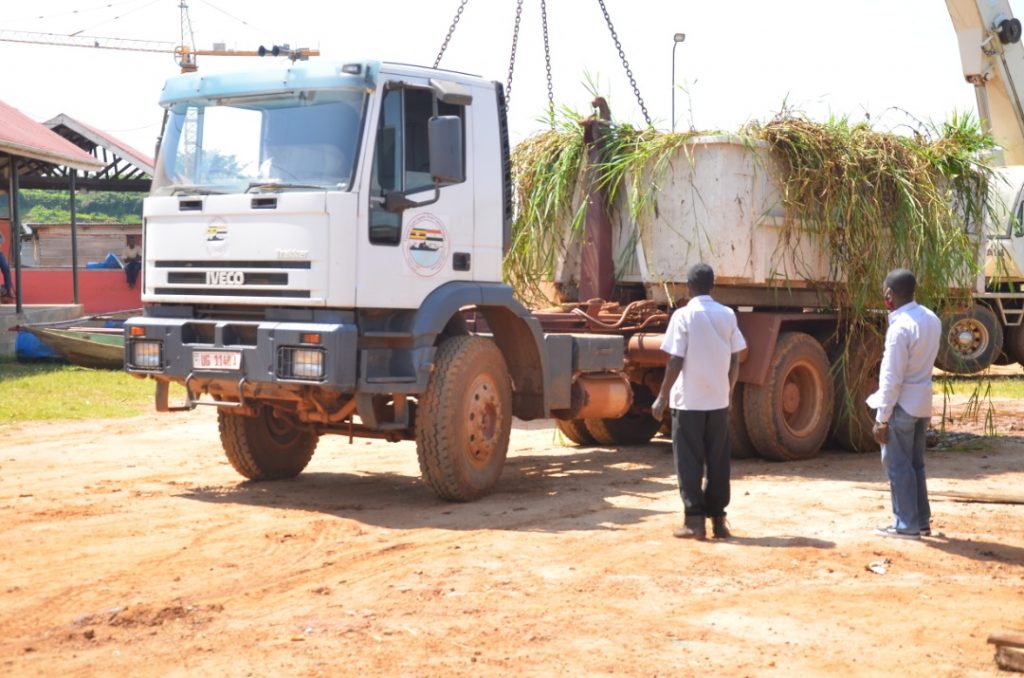 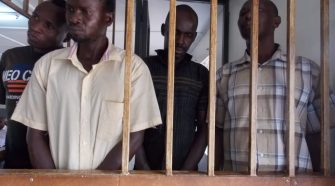