Cabinet has approved principles of the Animal Feeds Bills, 2018, a legislation which seeks to regulate the production and trade of animals feeds as well as address the problem of substandard feeds.

According to the government spokesperson, Ofwono Opondo, the objective of the Bill is to promote a well regulated animal feeds industry and integrating the various aspirations for its stakeholders.

It will also promote the development of the industry for increased production of quality feeds at affordable costs, Opondo added.

He was Tuesday briefing the press on the resolutions passed by Cabinet during its sitting at State House on Monday.

A section of Ugandan livestock farmers have for long complained about adulterated animal feeds on the market said to be contaminated with substances like sand, ash and sawdust.

Such feeds can cause death to animals and poultry as well as stunted growth leading to low productivity and increase in disease burden, which in turn increases the burden of cost on the farmers.

Part of the reason why the problem has persisted is because there hasn’t been any law to stipulate who is authorized to produce and sell these animal feeds.

“We have animal feeds which are imported into the country, we don’t have a law regulating them. When you go to the several towns, a person sets up a kiosk, puts machine and they start milling maize, cotton cake, gnuts and they make their own feed,” Opondo told reporters during the briefing at Uganda Media Centre in Kanpala.

“Those of you who are farmers, you know that much of that feed is substandard. So, this is going to be the first time government is introducing legislation to regulate and govern what steps one goes through to be certified as animal feeds producer,” he added.

Vitalis Shaka, an official from Uganda National Bureau of Statistics (UNBS) a couple of years back cited landing sites and various business hubs mainly Kisenyi in Kampala, as the most notorious places where adulterated feeds are sold.

He said that some medium and large feed milling companies also add sand to mukene (silver fish) and shells to the feeds, just to increase the weight and maximise profits.

Pastor Solomon Male, one of the famous poultry farmers in the Kampala, on Tuesday told this website that the policy was long overdue and that the government needs to further do away with imported feeds which he says have sidelined the local producers from the market since they are cheaply sold.

“The alteration of feeds is too much in Uganda and I commend government, but they should also consult people like us who have been in the industry for sometime. Our market is awash with feeds from foreign countries like China, Netherlands and India,” he said.

“Concentrates and pellets from Netherlands kill the local chain which produces soya, shells, sunflower, cotton in preference of cheap foreign feeds,” he added.

Some people argue that the problem is exacerbated by the fact that most feed manufacturers, especially small-scale ones, lack basic training in animal nutrition and feed milling technology. 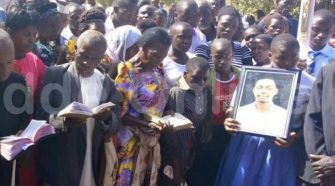