A public health campaign has been launched in western Uganda after scientists unexpectedly found the region was afflicted by a tropical disease that causes disfigurement and swelling.

The discovery came to light after experts were dispatched to Kamwenge district to investigate an outbreak of lymphatic filariasis, more commonly known as elephantiasis. A team of specialists from the Ugandan ministry of health, the World Health Organization and the Centers for Disease Control and Prevention was surprised to find that the condition causing limbs to swell was in fact podoconiosis, also known as non-filarial elephantiasis. The disease was previously unknown in the region.

Unlike lymphatic elephantiasis, which is contracted when a parasitic worm is transmitted to humans by mosquitoes, podoconiosis – also known as “mossy foot” because it causes moss-like warts called hyperkeratotic papilloma – is contracted by walking barefoot on irritant volcanic soils. Blood samples taken by scientists from 52 people tested for lymphatic filariasis found no worms present. 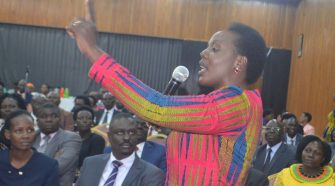