As the country continues to experience heavy rains which have made some areas inaccessible, the Minister of State for Higher Education, Eng. John Chrysestom Muyingo has revealed that government is considering setting up emergency examination centres to allow Primary Seven (P7) candidates sit their final examinations.

This was after a call made by Mukono South Member of Parliament (MP) Muyanja Senyonga who noted that a number of bridges have collapsed due to the heavy rains making some schools inaccessible to the pupils.

Senyonga gave an example of his constituency where River Sezibwa has been washed away. He said that over ten schools have been affected and pupils will have to cross using a canoe to write their exams which is so dangerous and risky.

“As I talk now, River Sezibwa is already washed away, and over 10 schools are on the other side. I have delayed today because I was trying to secure a canoe boat so that a few students can cross and go to school,” Senyonga said.

According to the Uganda National Examinations Board (UNEB) timetable, pupils will start their Primary Leaving Examinations (PLE) on November 1, with the briefing of candidates across the country.

The pupils will sit for their first paper, Mathematics and social studies & religious education, on November 4.

On November 5, candidates are expected to sit for integrated science and English as their final papers.

“The exams are on Monday and the Ministry of should do something immediately. If they can change examination centres that instead of children crossing can use one school on the other side so that they can sit for their exams,” Senyonga requested.

In response, the Minister, Muyingo said that government is concerned about the situation is assessing the situation and appropriate action will be taken.

“We have received that information and our team is studying the situation. If it requires some special assistance, we shall provide it to ensure all our candidates sit their final exams without any disturbances,” Muyingo said.

Earlier, a number of other legislators had called upon government to consider offering timely relief to a number of people who can’t access life necessities after heavy floods that have washed away transport infrastructure cutting off several communities.

Commenting on the effects of heavy rains, the Minister of Finance, Matia Kasaija noted that government is concerned and will be updating the house on the way forward.

“We have just concluded a meeting where we tasked the Uganda National Roads Authority (UNRA) to give a comprehensive report on status roads due to the heavy rains that we are experiencing so that we can begin to plan on how to raise funds,” Kasaija said.

The Minister said the situation is dire in parts of Teso, Bunyoro, Masaka.

“We are reaching a point where communities are being cut off, we are addressing the matter and next week we shall update the house on how to sort it out.”

Manifesto Week: Govt Wage Bill Increased by 42% Since 2015 Due to Enhancement of Salaries 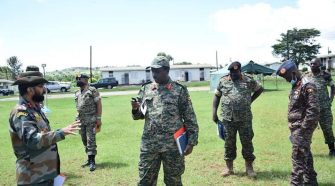