The Cross Cultural Foundation of Uganda (CCFU) has come out to protest the planned demolition of Watoto Church building to pave way for the construction of a modern 12-storeyed building.

The organization says it has come to its attention that Symbion Uganda Limited acting on behalf of Watoto church has submitted an architectural plan to Kampala Capital City Authority (KCCA) proposing the demolition of the historic building that houses the church along Kampala road.

This will be replaced by a modern 12-storeyed building with a 3-star hotel, 3,000-seater auditorium, shopping centre and youth centre.

CCFU Executive Director, Emilly Drani said that if this is allowed to happen, Kampala will lose yet another element of the city’s history.

“In rush to ‘modernise’, Uganda’s historic buildings, sites and monuments are under threat. Most well-known buildings are fast disappearing while surviving ones are dwarfed by newly constructed tower blocks which means a lost connection with our shared past, posing a risk of losing unique features that prevent our cities from becoming indistinguishable from each other,” Drani said.

Drani said the building should be preserved because it is one of the 44 buildings and sites in Kampala documented as historic buildings.

“Formerly known as the Norman Cinema, then as The Centre and now as Watoto Church, this building is significant given its historical, social and architectural merits. It was designed in a unique modernist and post-art-deco architecture, the only one of its kind in Uganda,” Drani explained.

The building was built in early 1950s by Norman Godinho a Goan Indian and it was the first large, lavish movie palace in Kampala which became a prototype for all the others that were built in 60s.

Drani noted that the building reflects how Ugandans spent their leisure time in the early 50s and 60s an era that had no internet, no DVDs players, no computers nor mobile telephones for entertainment adding that the building housed a bar and nightclub called the Tabloid which later was renamed to Laquinta in the 1960s.

“We therefore demand that the Management of Watoto Church review the development plan to preserve the architectural uniqueness of the sites. Whereas the interior of the building can be partly modified to accommodate adaptive re-use of the building, the outside should be left intact,” Drani demanded.

She added that Watoto church management can consider setting up any new structure elsewhere on the site but leave the historic building intact.

Govt Resumes Repatriation of Ugandans with Flights from U.S, Canada and Qatar this Weekend 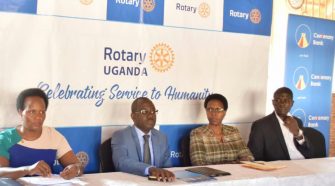