There have been several media reports that the Assistant Superintendent of Police (ASP), Pamella Kentaro had been deployed to spy on Kyadondo East MP, Robert Kyagulanyi alias Bobi Wine during his stay in America for treatment.

The criticism began after pictures circulated showing the police officer on the same plane with Bobi Wine in close range and a suspicious look.

The reports on social media indicated that Kentaro had been deployed as a deadly operative by President Museveni to spy on Bobi Wine and all his movements in the US.

“She is called Pamella, attached to the inner intelligence wing of President Museveni but also operates in police.. she was in USA masquerading as a Ghetto upcoming singer looking for support and immediately became a friend of Bobi Wine. They traveled together from USA to Entebbe and she gathered a lot since she volunteered to be a People Power Mobiliser,” read the post that was making rounds.

However, this site has learnt that indeed Kentaro was on the same plane with Bobi Wine but not from USA as it was alleged.

Kentaro met with Bobi Wine at Jomo Kenyatta International Airport and indeed had a chat before boarding the same plane to Entebbe.

“It’s quite absurd that a lot of negativity is being spread about me having been planted as a spy on Hon. Kyagulanyi. Me and Bobi have been friends from way back and he knows that I’m a police officer. On Thursday I met him at JKIA, I was traveling from Mombasa and him from US as alleged. He was the first to see me at the cafeteria and asked me to join him at the table with his brother Cald Dax,” Kentaro wrote in a social media post.

“We chatted for close to two hours waiting for our flight to Entebbe. On the plane, he sat next to Hon. Winnie Kizza and asked that I sit across on the other side of the aisle near him,” She added.

Indeed Kentaro’s explanations were defended by a letter from the Judiciary that later circulated indicating that indeed she was among other police officers that had been nominated to attend a training workshop on Information exchange.

Uganda Police Force also took to Twitter to explain that Kentaro was not spying on Bobi Wine.

“Kentaro has been providing security to Bobi Wine during his events at One Love Beach Busabala, and they know each other. Police cannot deploy anybody who is already exposed in uniform to do undercover operation, more so someone who is already known to the target as a Police Officer,” the police tweet read.

However, Bobi Wine is quiet about the issue and has not defended the officer who is said to be very well known to him.

Army Sets Requirements for LDUs, Recruitment Set for this Month

Bobi Wine was Peacefully Escorted to His Home, Police Clarifies 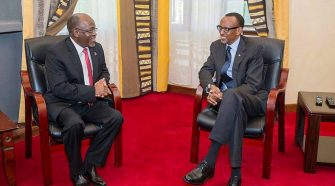