President Yoweri Museveni has apportioned blame to the Police for enforcing a colonial law - annoying the President - instead of focusing on the substance of the acts or intentions of people who commit offences relating to incitement.

According to the authorities, Joseph Kasumba, a resident of Kanoni town, abused Museveni who was on his way back from attending a New Yearā€™s church service at St Johnā€™s Cathedral.

“When his [Museveniā€™s] convoy reached Kanoni town, Special Forces Command soldiers reportedly ordered one of the drivers to move his vehicle from the road to allow the presidential motorcade pass. This is when a group of youth allegedly led by Kasumba started exchanging words with the soldiers and abused President Museveni, calling him all sorts of names including Bosco. They also blamed him of constructing narrow roads,” the Daily Monitor reported in January.

The Gomba District Police Commander, Robert Kuzaara said at the time that the accused would be charged with alarming, annoying and ridiculing the person of the president contrary to the Penal Code Act.

Makerere University researcher, Dr Stella Nyanzi who is jailed in Luzira prison was also arrested for abusing President Museveni and his deceased mother in a September 16 Facebook post.
Several times, the charge (annoying the President) has been preferred along with others like offensive communication and disturbing the peace of the President.

In 2017, David Mugema 31, a local musician together with his music producer were arrested and charged for annoying the President.

Prosecution alleged that Mugema and Muwanguzi between 2015 and 2017 at Salama Road in Makindye, Kampala, repeatedly composed, recorded, produced and electronically communicated through social media a song titled ‘Wumulaā€™ wherein they attacked and disturbed the peace of President Museveni without a legitimate reason.

It was further alleged that Muwanguzi aided Mugema in producing the said song which annoyed the President. But the Director of Public Prosecution (DPP) later dropped the charges.

Asked on Thursday by a reporter on his take regarding the charge of “annoying the President”, Museveni who was addressing a news conference at State House Nakasero said he has no problem with being annoyed.

“Annoying the President, I donā€™t mind being annoyed. I think that was a colonial law which I used to hear about,” the President said.

“Police should concentrate on the substance. Like telling lies, incitement and sedition. But a President can be annoyed. If heā€™s annoyed only, thatā€™s not a big issue”. 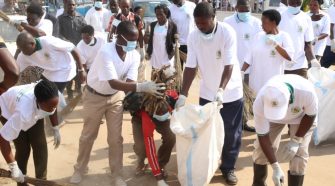 MUST Leads Cleaning Exercise in Mbarara Ahead of Annual Research Symposium