Prime Minister Modi will hold bilateral talks with President Yoweri Museveni at State House Entebbe Tuesday, likely to centre around deepening trade ties between the two countries. He will on Tuesday evening meet with approximately 1,000 members of the Indian Association of Uganda at Kololo independence grounds in Kampala.

On Wednesday, PM Modi will address Members of Parliament.

Modi who is on an African tour where he will visit three countries arrives in Uganda from Kigali, Rwanda where he was on state visit and will Wednesday proceed to South Africa where he will attend the BRICS (Brazil, Russia, India, China and South Africa) summit.

The visit to Uganda is historical given that it will be the first time a sitting Indian Prime Minister visits this country in two decades.

He is among other things expected to sign agreements for financing worth USD 141M in the electricity sector and USD 64M in agriculture. Other Memoranda of Understanding (MOUs) in the areas of Defence, ICT, cultural exchange, renewable energy and one for Visa waivers are also expected to be signed.

India’s Ministry of External Affairs said in a statement that Africa has been the top priority of India’s Foreign Policy adding that “the visit of the Prime Minister to Rwanda, Uganda and South Africa will further strengthen our relations with the African continent”.

“India shares close, warm and friendly relations with Africa which are cemented by robust development partnership and a large presence of the Indian diaspora. A number of agreements and MoUs in the areas of defence, trade, culture, agriculture and dairy cooperation are scheduled to be signed during the visit,” the statement further read.

The Indian High Commission in Kampala has concurrent accreditation to Burundi and Rwanda.

In Uganda’s economy, Indians have established a firm and significant footprint especially in the sectors of manufacturing, trade and service sectors including health.

Bilateral trade between the two countries amounted to USD 728 million in 2010–11, the balance of trade heavily in India’s favour with Ugandan exports to India accounting for only $16.7 million of the total trade. Uganda imports almost 30% of its pharmaceuticals from India while India emerged the second largest source of Foreign Direct Investments for Uganda in 2011.

The current bilateral relations are a sharp contrast to the dark events that unfolded back in 1972 when former President of Uganda, Idi Amin, ordered the expulsion of Asians including Indians.

Amin gave an ultimatum of 90 days for Asians who had at the time dominated business in Uganda, to leave the country. He accused Asians of disloyalty, non-integration and commercial malpractice and said the move to expel them was to meant to give Uganda back to ethnic Ugandans. 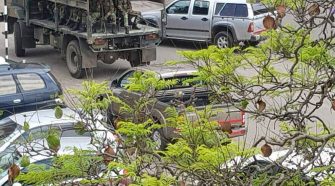