A body of a boda boda cyclist who went missing two and a half weeks ago has been discovered in Isingiro district, Police says.

A case was reported on July 3 by his mother.

On July 9, at around 12:30pm in the afternoon, locals spotted the body which was later identified as Ssali, in Nyarubungo 2, Masha sub-county in Isingiro district. The local residents alerted  the Police.

A statement by Police says the body was found tied with ropes and dumped in a farm.

However, the motorcycle Reg No UEV 922G which the deceased was driving prior to his death has not yet been traced.

Police say no suspects have so far been arrested but that investigations are still on going into the matter.

The incident comes in the wake of a spike in murders of boda boda cyclists with the intention to rob their motorcycles, which many in the industry attribute to the growing demand in motorcycle body parts. The stolen motorcycles are reportedly sold in areas of Ndeba and Katwe and immediately dismembered.

The country was recently gripped by shock after a video captured by CCTV cameras circulated on social media, showing a gruesome murder of a boda boda rider, by two unidentified robbers.

The assailants posed as potential clients and attacked, strangled and repeatedly hit the cyclist with a stone to the head, killing him instantly.

The two immediately after committing the crime, took off with the motorcycle.

About a week ago, following intensified operations to crack down on the criminals targeting boda boda cyclists, Police in the Kampala metropolitan area recovered various parts of disassembled boda bodas and number plates.

ASP Luke Owoyesigyire,  the Kampala metropolitan police deputy spokesperson said that in the same operation, a stolen motorcycle was recovered from robbers.

He said the operation was a result of information given to Police by some of the suspected robbers upon detaining them. 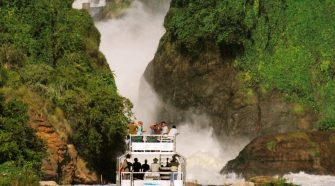