The journalists led by UJA President, Bashir Kazibwe, UPAA President, Moses Mulondo and HRNJ-U National Coordinator, Robert Ssempala were first involved in a brawl with the Police which had barred them from holding any peaceful processions.

After arresting and releasing some of the journalists, it was agreed that they access the Police headquarters in Naguru by using the Police bus that was waiting for them at the Central Police Station (CPS) in Kampala.

These later camped at the Police headquarters and their leaders were allowed to interface with the Police leadership led by the Assistant Inspector General of Police (AIGP), Asan Kasingye.

“On behalf of the media fraternity, we wish to petition you for lasting solutions to the continued violation of rights of journalists and the rights of other Ugandans,” noted UJA President while delivering the petition.

The petition and other acts of protest follow last week’s assault against journalists who were covering the recent Makerere University students’ strike.

During the strike, Police officers deployed at Makerere university blocked journalists for days from accessing the campus. In addition, some journalists were assaulted and others dispersed using teargas.

The journalists have thus demanded that Police takes a number of measures to clean up the ugly image police keep getting in violating the rights of journalist.

Journalists are demanding that the Police authorities parade and publicly prosecute all the Police officers who were involved in assaulting of journalists and interfering with their work which is always in the public interest.

The journalists have also demanded that the authorities pass a directive to all Police officers to stop assaulting journalists and interfering with their work.

“Considering that when you became IGP, you promised to transform Police, we ask you to undertake necessary measures to make Uganda Police a professional state institution that is not only subordinate to civilian authority but also neutral and driven by public interest other than interests of individuals,” Mulondo noted.

The leaders demanded that the leadership of Police provide for the compensation of journalists who were assaulted and those whose equipment were damaged or destroyed.

They also want Police to constitute a committee with lawyers and experts on human rights to develop a well researched strategic plan for redeeming police’s image through a set of short-term and long-term measures for ending police’s violation of the rights of journalists and other Ugandans.

“If you the (IGP) are not ready to undertake the above recommended measures and many other necessary measures to redeem the image of Police from one that violates the rights of Ugandans to one that protects their rights, we humbly ask you to resign. That is what happens in all civilized and democratic societies,” the journalists demanded in the petition.

Last week, the journalists’ Association declared a boycott of coverage of activities involving the Uganda Police Force in retaliation of the brutality that journalists have suffered at the hands of Police officers. 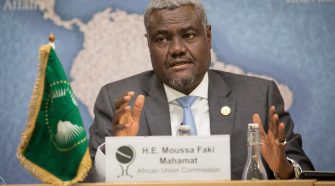