The Mayor Kawempe Division, Emmanuel Sserunjoji was Tuesday arrested on allegations of inciting violence, according to Police.

Police arrested Sserunjoji from Kawempe ‘ku taano’, at around 1pm on Tuesday while he was allegedly loudly banging a cooking pan as part of a new campaign by Opposition groupings ‘People Power’ Movement and ‘People’s Government’.

The ‘No Nedda’ campaign is aimed at uniting Ugandans in voicing their call to government to end injustices meted on Ugandans especially those who don’t support the ruling National Resistance Movement and President Yoweri Museveni.

In this campaign, opposition supporters are required to make constructive and necessary noise with whatever item they can use to make any sound in protest.

According to ASP Luke Owoyesigire, the Kampala Metropolitan deputy Police spokesperson, Sserunjoji who is also the ‘People Power’ coordinator in Kawempe Division, was in his car at the time of the arrest.

“He was in the car, stood out through the roof and started banging saucepans while inciting the public into a procession. The car was moving at a slow speed and after realizing that Police was following him, he sat back drove off very fast. We however intercepted him from Ku taano and arrested him,” Owoyesigire told this news website.

He said he is charged with inciting violence but Police was considering to release him on bond.

He has since been released on police bond. 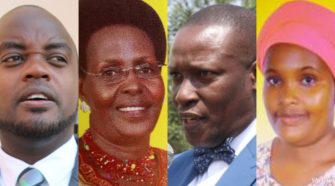