Ugandaâ€™s KCCA FC, one of the clubs which have been representing the country in the CAF Confederation Cup, has been knocked out of the tourney.

The exit is as a result of their 3-2 aggregate loss against Congo Brazzavilleâ€™s SC Otoho Dâ€™oyo.

On Sunday afternoon, the ‘Kasasiroâ€™ boys failed to overcome their first leg 3-0 defeat against the Brazzaville outfit, when they beat them 2-0 at the StarTimes Stadium in Kampala in the return leg.

The first stanza ended goalless, but in the second stanza, Patrick Kaddu converted a spot kick in the 63rd minute, before young lad, Allan Okello, tapped the second in the 90th minute.

Mike Mutebiâ€™s side knocked out Tanzaniaâ€™s SC Mtibwa Sugar 5-1 on aggregate before reaching the 2nd final 1/16th round, but, the visitors have now sealed a spot in the group stages. 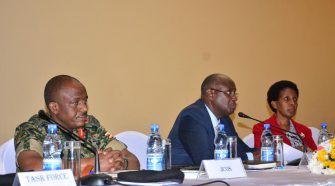