Lt Gen Andrew Gutti has expelled Jimmy Muyanja, one of the lawyers representing Boda Boda 2010 patron Abdalla Kitatta and his co accused from court over indiscipline.

During the proceedings on Tuesday, one of the lawyers alleged before court that the army prosecutors were assisting the witness to answer questions from the defence lawyers.

When Maj Raphael Mugisha who leads the army prosecutors stood up to defend himself, Muyanja would then bang the table in protest over what was being said prompting Lt Gen Gutti to expel him out of the court.

“Get out of this court and don’t return. Who are you in this court? Why do you bang the table,” Lt Gen Guti ordered.

“Where is Military Police to take him out? I have taken the decision and it is final. May be another chairman can reverse it.”

Efforts by Muyanja and his fellow defence lawyers to apologise for the indiscipline fell on deaf ears as Gen Guti insisted the lawyer is short tampered and needs to be forced out so he can learn manners.

He insisted that the lawyers must always be disciplined while in court.

They are accused of unlawful possession of 30 and 20 rounds of ammunition for SMG rifles and pistol respectively contrary to section 161 of the UPDF Act. 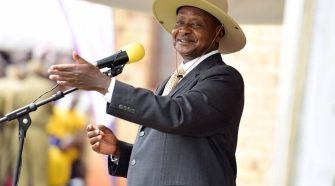