The military has said it has not received any complaint relating to recent allegations that military personnel deployed at Makerere University recently, engaged in acts of sexual assault against the university students.

The Minister for Defence and Veteran Affairs, Adolf Mwesige told the Parliamentary Committee on Education on Wednesday that UPDF has not received any such complaints.

Mwesige told legislators on the committee that a board of inquiry has been set up to investigate all details pertaining to the conduct of the deployed troops.

“The findings of the investigation now in advanced stage will guide the next course of action to be taken against those that will be found culpable. As the investigations continue, we wish to state that no person has reported a specific case of sexual assault by a member of the UPDF,” the Minister said.

He added; “Should we however receive such complaints, it will also be investigated and action taken”.

Politicians, rights activists and a section of the public recently condemned the brutality used by the military and Police in quelling the strike at Makerere Univeristy. Others said there was no need for the military to intervene since there was Police presence.

In justifying the deployment of the military, Minister Mwesige said Makerere University was a staging areas for the anti-crime operations in the neighboring areas of Wandegeya, Kivulu, Katanga, Kikoni and Kasubi.

He said the UPDF opted for Makerere because “the Police stations from where it could have staged had limited space and facilities that could not support a platoon size of a force with their limited equipment”.

“Therefore by the time the strike at Makerere University started on 22nd October 2019 and Uganda Police Force sought assistance from the UPDF, the Military Police already had presence within Makerere campus”.

Regarding the alleged brutality against students, the Minister said that on learning of errors by some individual military personnel “who could have acted out of the rules of engagement” the UPDF leadership withdrew the Military Police deployed at the University.

“Additionally, the UPDF arrested the Commander who was in charge of the troops operation in Makerere University and detained him at Makindye Military Barracks”.

The UPDF has faulted students for the chaotic situation at Makerere University saying they acted in a manner in total breach of law and order. The army says it only came in to play a supportive role of the Uganda Police Force.

“We reiterate that the UPDF has a set of principles that define its character. Discipline and being a pro-people army remains its bedrock. The UPDF leadership will always uphold this position and whoever deviated from it usually faces the law”.

On Wednesday, the Management of Makerere University dismissed the allegations of sexual abuse against students by security personnel.

The University Deputy Secretary, Yusuf Kiranda noted that in regard to the current unrest, the allegations of sexual abuse of students have only emerged on social media.

The University Management has not received any complaints of alleged sexual abuse from students or the police, he said.

According to Kiranda, Management has requested any student with a complaint relating to sexual abuse to come forward so that the matter can be handled, but no student has come up to-date.

However, Kasese Woman MP, Winnie Kiiza told the administrators that the issue of sexual harassment of students should not be casually handled by the university but must be investigated further.

“We should understand that by nature, very few women will come out to say that they are sexually abused, it would be unfair to simply say that you have opened up files and waiting for complaints from students,” Kiiza said. 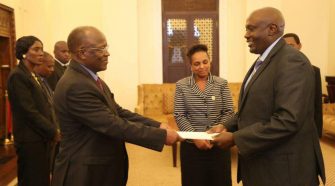