MUASA, the body that brings together Makerere University academic staff has Monday together with students launched a charity drive to send relief to communities in Bududa district which were affected by last week’s landslides.

Over 40 people are reported to have lost their lives and hundreds injured following the landslides that hit Suume village in Bududa district days ago.

The campaign that has been launched at the University is aimed at rallying all generous Ugandans including lecturers, students, parents with all the necessary relief that can be offered to the victims of the landslides.

“We are setting up a team that will go on the ground in Bududa to among others carry out research on why the landslides keep up attacking the area as well as offering lasting practical solutions,” noted MUASA Chairman, Dr Deus Muhwezi while addressing the media at the university on Monday.

The Chairman appealed to all generous Ugandans to contribute at least Shs 60,000 which money will be used to buy a number of relief items including food, blankets, matresses and soap among others.

He noted that a team of close to 100 university students and staff will be dispatched to Bududa to deliver the collected iteams to the victims.

“We shall as well hold prayers in some mosques in Bududa on Friday as well as holding prayers in churches on Saturday and Sunday in commemoration of the deceased.”

He has appealed to government and Ugandans at large to always be mindful of the weather conditions as well as the effects of climate change as well as taking precation measures.

Muhwezi revealed that the ABC campaign also has a scientific component which will seek to provide innovative solutions to the weather related disasters in Eastern Uganda.

“Together with the Climate Change Innovation Centre, we are going to engage and work together to raise funds over the years to provide aid and technical support using science,” he said.

On his part, Prof Edward Nector Mwavu from the College of Environmental Sciences who is also Vice Chairman for MUASA stressed the need for communities to heed to appeals to relocate.

“Hazards do not necessary need to lead to disastsers. The public is encouraged to heed to warnings by government to move. Communities living on the slopes of Mt Elgon are encouraged to reduce activities that increase vulnerability to mudslides and landslides,” Prof Mwavu said.

In addition he proposed that research is undertaken to establish why communities have been resistant to relocate despite pleas by government.

President Yoweri Museveni has since visited the affected village of Suume in Bukalasi sub-county, Bududa district with an assurance to the people to fast track earlier efforts by government to relocate them to safer parts of the country.

The President however apologised to the residents on behalf of government officials who have since not delivered on the relocation program.

“I was let down by my people. I am here to apologise on their behalf. A plan was made and the people had agreed to move. But it seems there was lack of coordination. I apologise for this; we are now going to move very fast,” the President told the mourners.

“Stop Focusing Only on the Negatives in Uganda” - Museveni Tells West 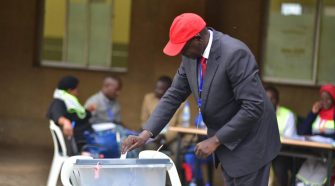