It was alleged that in January, Mayinja met President Yoweri Museveni at his Kisozi state lodge but the singer denied the allegations.

On January 8, 2020, Mayinja launched his own movement called “Peace for All, All for peace” with an objective of creating Unity among the youth, however this was received with immense criticism from the people power camp claiming that it was a Museveni project meant to weaken their movement.

While at the National Unity Platform head offices in Kamwokya, Mayinja accepted that he met President Museveni at his farm, a move he regrets.

Mayinja said that he went to find out whether the president had a good plan for the country, but claims he found none.

“When I met the president, I asked him about his plans for the country but he had no plans for the future of our country, let’s all support Kyagulanyi, and I apologize to you all I am really sorry for what happened,” he added.

While handing over the NUP Membership card to Mayinja, Kyagulanyi asked people to forgive Mayinja and called upon artists who defected to emulate Mayinja and stand with the oppressed.

“I would like this to act as a message to all the celebrities and artists that Ugandans love you, and you should always bare it in mind that when you stand with the oppressed they love you more,” Kyagulanyi said.

“My brother Mayinja has inspired many of us over the years and I am sure when he wandered off at some point, his heart was with us, I am grateful that you have given him a warm welcome,” he added. 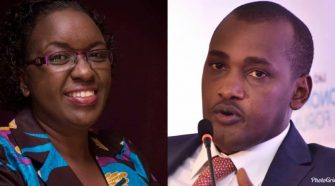