Police in Mbarara is holding a man who was found slaughtering a dog whose meat he said he intended to sell to butchers in Mbarara. The man said to be of Congolese descent was identified as Sadru Mustafa, 23, and lives on the  streets of Mbarara municipality.

As butchers were Friday looking for animals for slaughter ahead of the Easter festivities, Mustafa was found by locals Kisenyi cell, Kakoba Division, in the process of skinning a dog.

“I have been doing this business for so long for my earning. I can’t even tell for how long I have been selling dog meat,” the suspect said.

He added that he was being paid by some of the butchers to provide them with such meat.

“I am given Shs 30,000 by butchers for every dog I slaughter and they mix that meat with what they receive early morning for sell,” he added.

Moses Amanyire, the Mbarara municipality veterinary officer described the  incident as unfortunate. He condemned the act of selling dog meat to unsuspecting customers.

He told SoftPower News that such operations will continue with an aim of arresting those selling wild and dead meat to the people.

“We are going to carry out investigations together with police to identify apprehend all culprits,” Amanyire said.

The man (suspect) was handed over to Mbarara police for safe custody and further interrogations as locals wanted to lynch him.

He later led Police and other people to a butcher at Tataitwe road in Kijungu cell where he supplies the dog meat. However, the butcher owner had escaped.

SoftPower News made attempts to reach the Rwizi region Police spokesperson, ASP Samson Kasasira to understand what  charges that Mustafa faces, but he could not pick telephone calls. 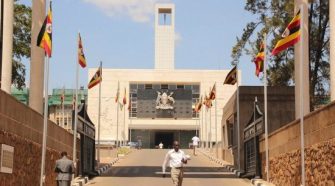