Jinja East Member of Parliament (MP), Paul Mwiru has tabled before Parliament a Constitution (Amendment) (No.2) Bill, 2020 which seeks to amend the Constitution to provide a mechanism for addressing regional imbalances in the recruitment in public offices.

The bill which was tabled for the first reading comes at a time when a section of members of the public are concerned about the unequal distribution of opportunities in recruitment, appointments and promotion of persons in public offices.

They noted that some regions are more favored than other regions leading to unequal sharing of the national cake.

Mwiru argues that there should be an affirmative action by the State in distribution of employment opportunities in the country.

“The State shall put in place affirmative action to promote equitable distribution of employment opportunities for any office established by this Constitution, by an Act of Parliament or within the public service based on the regions of Uganda,” Mwiru stated in the bill tabled before the house.

Mwiru said that as such, the Equal Opportunities Commission should submit annual reports to Parliament on the progress made by the State to ensure equal distribution of employment opportunities in the country.

The Bill as well seeks to establish Election Petition Tribunals to determine the election petitions arising out of Parliamentary elections, whether a seat of a member of Parliament becomes vacant or whether a person has been validly elected Speaker or Deputy Speaker or having been so elected, has vacated that office.

According to Mwiru, the Chief Justice shall in consultation with the Deputy Chief Justice and the Principal Judge, by notice in the Gazette, appoint Election Petition Tribunals to serve for a term not exceeding two years.

“Each Election Petition Tribunal shall consist of a chairperson and four other members appointed from Justices of the Supreme Court, Court of Appeal of Judges of the High Court,” Mwiru noted.

The Bill has been sent to the Committee of Legal and Parliamentary Affairs for perusal and will report back to the house for the second and third reading before being passed into law. 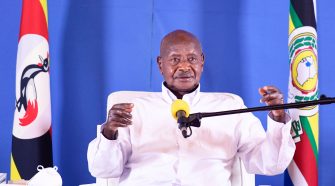