Opposition Democratic Party (DP) has insisted that they will go on with the planned UYD/DP reunion in Mukono despite calls by some members of the party to call off the meeting following the incarceration of the Mukono district Chairperson for DP, Betty Nambooze.

The reunion National Coordinator, Samuel Lubega Mukaaku told the media on Tuesday that the meeting in Mukono will host three other districts including Buvuma, Buikwe and Kayunga at Festino City.

Mukaaku said that the Party has learnt that the enemies of reunion wanted to disorganize the meeting by arresting some of the party members including Nambooze but vowed not to be derailed by such forces.

Democratic Party President, Norbert Mao said that the party will stay focused on the main agenda of uniting the party as well as empowering leaders.

Mao has also disregarded reports that DP has been silent on Nambooze’s fate saying that they have indeed done all they could in their best including aiding her release on police bond as well as gathering youth to demonstrate calling for her release.

“At the time of Nambooze’s arrest, I was the first person to call the MP whose call was picked by her Personal Assistant (PA). I assured him that I was sending the party legal adviser to deal with the legal issues and indeed she was released on the police bond,” Mao said.

“As I talk now, we have written to all groups including the Human Rights Watch, Amnesty International and every international organization talking about this abuse. There is no party that champions human rights and rule of law than DP,” Mao said.

On why they chose to continue with the meeting, Mao said that Nambooze’s unfortunate arrest happened just recently after the party had already taken up a decision to host the reunion of the party.

“It was a very difficult decision to make but we understand that leadership is for such decisions. Fortunately, DP is well-known for multi-tasking and we decided that we shall multi-task, allowing the meeting to continue,” the DP President added.

Nambooze Sympathizers to Forcefully Extract Her from Hospital 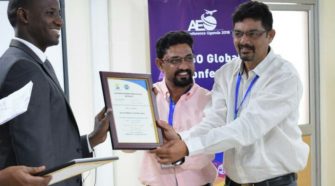