President Yoweri Museveni has in the latest measures to enforce physical distancing banned all outdoor physical exercises. This is in a bid to prevent gatherings of people so as to slow the spread of coronavirus in Uganda.

The Presidential directive follows a public outcry after an increase in cases of people engaging in physical exercises in groups, against the advice  government to observe social distancing.

Uganda confirmed a new case of coronavirus on Wednesday, bringing the total cases to 53. The Ministry of Health says that out of the 214 samples tested Wednesday, one (1) was positive for COVID-19. At least 3,600 samples have been tested since March 21.

For two consecutive days (Monday and Tuesday), Uganda did not register any new case of COVID-19.

In his Wednesday address to the nation, Museveni reiterated that the crisis that Uganda and the rest of the world is faced with is one where convenience is not an option. It is a matter of life and death, he said, urging the public to take the threat seriously.

“I have heard of people who go to exercise in public. I saw a video on the Northern Bypass, a huge number of people running - that they are exercising. If you want to exercise, you can exercise indoors,” Museveni said.

“That’s how (exercising indoors) I survive because I usually come home late after 11pm. I run within the room. You can make 20 laps or do some pushups. That’s how we survived when we were in resistance,” he said.

He says Ugandans must have discipline and stop the carefree kind of conduct.

“There should be no exercising in public. Exercise in your compound in your room”.

“I hear people saying they are bored of keeping home. That’s good for you, you could be in the grave. That nonsense of businesses and money is all rubbish. That’s not the issue now,” the President said.

He commented on concerns by some sections of the public regarding the disruptions caused to education and businesses, saying these are not priorities under the circumstances.

“We are not talking about social issues or where people are wedding. We are talking about life and death on a large scale as we have seen in other countries. I hear people talking that ‘Oh I was delayed, I was stopped’. Yes, that’s the least that can happen to you. Something more radical (death) can happen to you,” he stressed.

He warned that government will be “very harsh with everyone who’s playing around”.

To explain the logic behind the restrictions against mass gatherings, the President used the analogy of piles of dry grass and a match stick (fire). He said government is choosing to scatter the grass (social distancing) and block people with match sticks (travelers who have been exposed to the infection), in order to avert a mass fire (mass spread).

Museveni insists this virus is easy to prevent if people were serious and stopped playing with fire. He stressed the importance of individual responsibility in observing the set guidelines by Ministry of Health.

While some people argue Uganda’s readiness to fight the pandemic is lacking, the President argues otherwise. He said Uganda is prepared in the most critical aspect – testing.

He made reference to how the country has dealt with previous epidemics, particularly Ebola which first broke out in Uganda in 2001 at a time when the country had no capacity to test samples.

The samples had to be flown to Atlanta, Georgia in U.S. Uganda has since built capacity with the help of Germany and Centres for Disease Control (CDC), and now all tests are conducted in-country, Museveni said.

Uganda to Discharge 3 COVID-19 Patients who Have Recovered 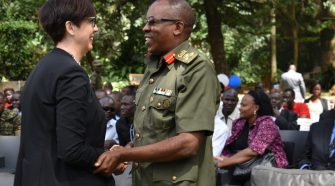