The Inspector General of Police (IGP), John Martins Okoth Ochola has said that investigations have revealed that some of the kidnap cases that have rocked the country in recent weeks are connected to terrorism.

He said that some of the suspects that have been arrested had used kidnapping as a medium to demand ransom and finance terror activities.

The IGP was Wednesday addressing the press for the first time since he was appointed IGP, on the rising trend in kidnaps and murders.

“Our analysis indicated that all these kidnaps fall under four categories. The first category is kidnap demand for ransom and the other is murder to finance terrorism,” Ochola said

Under this aspect, Ochola cited the kidnap and murder of Susan Magara in February this year, and the subsequent kidnap of a one Mubarak Kalenge a worker of KCCA in March. He said these two cases were perpetrated by the same suspects eight of whom have been charged before court.

“Some of the suspects we have arrested are allied to some terrorism groups. It would be premature for me to disclose or say now what those terrorist groups are ,” Ochola told journalists at the Naguru Police headquarters.

“In the near future once we arraign them in court, we shall be able to tell”.

He however later mentioned that 26 fishermen suspected to be allied to the Congolese rebel outfit ‘Mai Mai’ have been arrested after the rebels abducted six Ugandan fishermen on Lake Albert over the weekend.

“It is true 6 Ugandans were abducted on Lake Albert by elements of Mai Mai. They [captors] said they wanted 10 boxes of ammunition in exchange,” the IGP said.

“We also arrested 26 of theirs who were fishing on our side. We have the upper hand,” he said.

The aspect of terrorism is a new dynamic especially at a time when many have pointed to economic gains and psychopathy as some of the main reasons behind the kidnaps.

However, Ochola explained that according to the preliminary findings, the other causes to which the other kidnaps are attributed include crimes for passion, ritual sacrifices and self kidnapping.

The IGP revealed that a total of 42 kidnap cases have been reported and investigated by Police in the last four months. Out of these, 7 cases involved murder with 8 victims. Eight people have so far been rescued while 7 victims are still missing.

Twenty (20) cases were self kidnap in nature. These were as a result of love relationships, extortion, failure to account for loss of money and staying home for long.

Police have registered two cases in which the victims of kidnap were murdered for ritual sacrifices; Nabawanuka Halima of Sembabule district, Nakiseka Rose of Kanungu district. According to Police, three suspects including, a witchdoctor led the security authorities to locations where the bodies had been dumped.

“Among the three suspects is a witchdoctor that allegedly wanted virgin girls for sacrifice. Once the victims were rejected by the witchdoctor, the suspects in our custody went ahead to demand for ransom and kill those victims,” Ochola said.

What is being done?

Ochola says that Police have intensified their patrol and visibility across the country and stepped up joint security operations to pursue suspects. In addition, intelligence services have also been intensified to detect and deter crime.

Contrary to the outcry in the media and some sections of the public that the spike in kidnaps has created a state of panic, IGP Ochola insists that the country is calm and that the media is blowing the situation out of proportion. Rather, he implored the media to focus on the successes that Police and other security agencies have so far made in curbing these crimes.

“Those who think it is business as usual should forget. We shall harvest them and suffocate them in court. Our resolve to ensure peace and security is total. The situation is calm,” Ochola said.

“I want to encourage the public to report any case of kidnap to allow timely rescue efforts and to stop these acts of self kidnaps because it is criminal. Those involved will be prosecuted accordingly”

He further appealed to the public to desist from dealing directly with the kidnappers and making payments without the knowledge of the Police.

The Police Chief Political Commissar, AIGP Asan Kasingye warned the public against exposing themselves and their family members to security threats through social media. 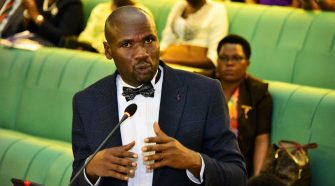