World Cross Country Championships Gold winner, Joshua Cheptegei, has been added to the Police books of history for his spectacular performance in the men’s 10 kilometer race in Aarhus, Denmark where he won Uganda a gold medal.

The revelation was made Monday by Police spokesperson, CP Fred Enanga while addressing journalists at the Police headquarters in Kampala.

He said that Cheptegei is one of the most disciplined officers in the police sports department saying his determination had produced him good results.

“We are incredibly proud of him, for earning himself, the Police and the country, a gold medal. His accomplishments at the world stage is a testament to his discipline, drive and determination to reach the highest level in the sports, placing him in the history books of the Police, where he joins the legendary, SSP John Akii-Bua, who also made a mark at the world stage,” Enanga said.

Cheptegei allowed Jacob Kiplimo, another Ugandan who also won a silver medal, to do the donkey work from the front, and waited just before midway the last lap to break.

He becomes the first Ugandan to win a gold medal in the IAAF World Cross Country Championships.

Cheptegei who is at the rank of Inspector of Police, together with 6 other police athletes, IP Stella Chesang, SPC Chemutai Peruth, SPC Chepkwemoi Y. Esther, SPC Chekwurui J. Matthew, SPC Sylivia Chelengat and their coach IP Njia Benjamin, helped Uganda come third overall in the championships, with a Bronze Medal.

As such, the Police spokesperson says the the Inspector General of Police, Martins Ochola “congratulates him on his accomplishments together with all the other athletes.”

“His victory will certainly boost the young group of talented, powerful and determined athletes in the force, who seek to excel in the field and at the World stage,” Enanga said.

In April last year, Cheptegei was promoted from the rank of Special Police Constables (SPC) to Inspector of Police (IP) when he won double gold in 10,000m and 5,000m in the Common Wealth games. 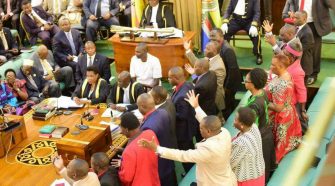