After several scientific studies, the government of Uganda  with the assistance of the Korea International Cooperation Agency (KOICA) and in partnership with the Teso Tropical Fruit Growers Cooperative Union (TETFGCU), decided to establish a fruit processing factory in Soroti District, Teso Sub-region  to take advantage of the abundant citrus crop in the Teso sub-region and the high yield per tree. The Ugandan government provided the land, utilities, and infrastructure. KOICA set aside US$7.4 million for equipment and training and is building the factory while TETFGCU will grow the fruit that the factory will process. Citrus fruit and mangoes are the principal fruits under consideration. The government of Uganda through Uganda Development Corporation (UDC) controls 80% of the shareholding whereas the Teso Tropical Fruit Growers Cooperative Union (TETFGCU) owns 20% of the shares.

The Construction of the Soroti Fruit Factory began in April 2015 and was scheduled to be completed in May 2016. Installing and commissioning the machinery and equipment was planned and anticipated to be from August 2016 to October 2016. By this anticipations the factory was scheduled to commence commercial operation in November 2016. After years of delay, the factory began test runs of its production lines in May 2018, with commercial commissioning planned for August 2018. Unfortunately due to unclear circumstances this did not also happen. With all these planning drawbacks and imperfections commercial operations were again re-planned and were expected to commence in April 2019.

At the beginning, 150 employees were hired, with the expectation to increase to 250 people when the factory runs at maximum capacity. Production is planned to be phased, starting with one 8-hour shift and gradually increasing to two and eventually three daily shifts. The factory has capacity to process six metric tonnes of fruit on a daily basis.

On 13 April 2019, President Yoweri Museveni launched commercial production at the completed factory. While speaking to the Nation at the launch, President Yoweri Museveni advised the people of Teso Sub-Region in Eastern Uganda to continue growing fruits because it is the medicine to getting them out of household poverty and the venture commands global market as well. He stated and I quote “I encouraged the people of Teso who had small land to stop growing cotton and go for fruits, dairy farming and fish farming because they are the products that can give money on a small scale piece of land. Although it took long, I am happy that the people of Teso got the message. I hear that you planted 8.2 million fruit trees. I can see them from above the ground,” Unfortunately, No sooner had President Museveni been lifted by Uganda’s Air force one back to statehouse than the factory closed operations. Factory management and UDC advance the argument that the factory lacks operational capital and they therefore require close to 40billion shillings to fully operate without interruptions. The factory fully operated on the launching day beyond which it had no capacity to maintain its operations.

Important issues arising from the factory befuddlement and cluttering include the following;

Firstly is whether actually 8.7 Million trees have been distributed in Teso since 2015? If yes where are the fruit farms? Are fruits trees distributed of the required quality?

Secondly is whether Teso leaders and people have the right mindset to tap into the available opportunity in this new factory? What attempts have been made to endear more people to grow the required specifications of citrus trees?

World over, investments like Soroti Fruit factory do not entirely rely on out growers. The factory should have and own its own fruit farms that can be supplemented by the out growers. This therefore means that it should have its own farm land and mechanized farming equipment like high value tractors including transportation. The factory can deliberately raise large scale farmers by giving incentives. Those with large farm land and have interest in fruit farming should have at least 35% of their plantation costs shared with the factory.

On the issue of the right quality of fruits, it is extremely perturbing for one to offer time and resources to plant OWC oranges that later turn out to be wrong quality at the time of harvest. This explains the anger some farmers recently had by chopping down their plantations. Why didn’t UDC right from inception ensure quality control of the fruits seedlings distributed by OWC? Or alternatively the factory should have or MUST now ensure that they personally raise the required seedlings and sell at a subsidized fee or distribute for free as an incentive to farmers.

Therefore; without a clear business operational spectrum, the Soroti Fruit Factory is simply a white elephant lying in the middle of a road in a forest.

The writer is the NRM youth chairman for Katakwi district.

Chameleone: I’m Not in Politics to Outshine Bobi Wine

Border Closure: Uganda’s Exports to Rwanda Have Fallen by 23% 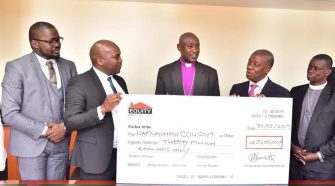