Parliament has approved the national budget framework paper of Shs 34.3 trillion for the next financial year 2019/2020.

The Chairperson of the Parliamentary budget committee, Amos Lugoloobi while presenting the committee report to Parliament said that the projected budget will increase from this financial year’s budget by over Shs 1.6 trillion.

According to the report, the Ministry of Works and Transport will likely still take the lion’s share of the budget at Shs 5.3 trillion, followed by interest payment and treasury operations taking Shs 2.9 trillion while Education will take Shs 2.6 trillion.

Lugoloobi noted that the budget of the Ministries of Education and Health are projected to reduce in the next financial year by Shs 95.7 billion and Shs 31.2 billion respectively.

“Ugandans must remember that last year, we borrowed money to work on Mulago hospital and construct more other hospitals like Yumbe which has led to a reduction in the budget for the Ministry of Health, though we have found out that there are more other requirements which need funding within the hospitals,” Lugoloobi said.

He applauded government for a very well thought out strategy that in theory emphasizes sectors with the greatest potential for generating employment, economic growth and prosperity like tourism and agriculture.

Lugoloobi noted that if government is to benefit from tourism there is need to upgrade and renovation of key tourism infrastructure including airfields and priority roads.

He said that there has been economic growth, mainly attributed to the increased private sector activity.

As such, he urged government to look beyond Namanve industrial park and instead extend more industrial parks to other areas like Mpigi, Kayunga, Wakiso and Buikwe, arguing that this will shorten the process of acquiring land by investors.

Full Statement: Bobi Wine Rejects Shs 20m to MPs as “Insensitive to the Plight of Ugandans”

Foot and Mouth Disease Vaccination is Free and Compulsory - Govt 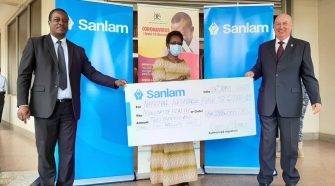 Our Reporter 2 days ago