Parliament has Wednesday passed the Landlord and Tenant Bill, 2018 restricting all rent obligations or transactions to be expressed, recorded and settled in the Ugandan Shillings.

The Physical Infrastructure committee chaired by the Robert Ssekitoleko Kaffero had left the matter to be determined by an agreement between the landlord and the tenant.

Several legislators including Kampala Central MP, Mohamed Nsereko noted that this should not be left to be decided by the parties since in most cases

Nsereko said that Uganda should borrow a leaf from developed countries and guard its currency through legislation that encourages use of local currency while transacting business.

The Kampala central legislator suggested that landlords should cease from charging rent in U.S dollars.

Other legislators vehemently rejected the provision saying that tenants do not have the power to negotiate with the landlord to charge rent in Ugandan Shillings.

The MPs got further boosted by the Ministers of State for Health, Sarah Opendi and Minister of Trade, Amelia Kyambadde who attacked fellow Minister Gabriel Ajedra who was defending the charging of rent in U.S dollars. Ajedra argued that there was need to support and strengthen currency.

“Is it in order for the Minister of Finance who is supposed to protect the Uganda Shillings to come and tell us about the U.S dollar aware that we have had challenges,” Opendi queried.

The House as well passed a provision which prohibits landlords from increasing rent of more than ten percent of the rent charges and this should only be done once in twelve months.

Parliament has also made it mandatory for both the tenant and landlord to keep receipts of their payment so that they can be used incase a misunderstanding arises.

The Bill has also approved a provision which mandates the landlord to give a tenant six months’ notice if they want them to vacate their building and have made it illegal for the landlord to annoy the tenant.

INVESTIGATION: Auditor General Wrote to Finance Advising Against an Audit on Insolvent UTL 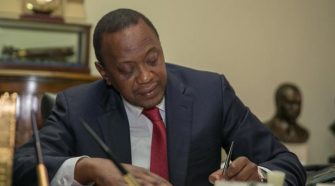