The on-going probe into Bank of Uganda’s closure of the seven defunct banks by the Parliament Committee on Commissions, Statutory Authorities and State Enterprises (COSASE) has revealed that Teefe Trust Bank was closed through irregular procedure.

Officials from Bank of Uganda led by the Governor, Emmanuel Tumusiime Mutebile on Thursday revealed that the Teefe Trust Bank was closed under the orders of the then Minister of Finance, Joash Mayanja Nkangi through the Banking Act of 1969.

“Teefe Trust Bank was closed in February 1993 under the provision of the Banking Act 1969 which accorded the powers to close the Bank to the Minister and not BOU,” said the BOU Director Supervision, Tumubweine Twinemanzi.

On further probe, the committee found out that the letter from the Minister to the BOU was written on November 4, 1993 something that was irregular.

The legislators found this contradictory since by November 4, 1993, the Financial Institutions Statute, 1993 had been passed and had withdrawn all the powers from the Minister to issue orders for the closure of the Bank.

“I find the information the Director is giving contradicting. I don’t think Teefe Bank was closed twice. The Minister made a decision to close Teefe Bank on 4th November 1993, after Teefe failed to fulfill the conditions set by Bank of Uganda. If they are referring to the law, the Minister was referring to Banking Act 1969. I wanted clarity in as far as when Teefe Bank was closed,” noted Mbarara MP, Michael Tusiime.

The committee Chairperson, Abdul Katuntu also scrutinized the Minister’s letter and told BOU officials, “It isn’t true that Teffe was closed in February 1993, so your response isn’t as accurate. Teffe was actually closed on 4th November 1993”.

Katuntu added, “What we see is that the Minister closed the bank without the relevant authority because the letter that was ordering the closure of Teefe Bank came from his office yet he had no authority to that effect because his powers were trimmed when the Financial Institutions Statute came into effect”.

The legislators sitting on COSASE added that Section 34 of the Financial Institutions Statute stipulated that at the time of closure, the Minister didn’t have the powers to close the Bank since these powers had been vested into the Central Bank.

Indeed, BOU Legal Director admitted that the Minister didn’t have powers to close the Bank under the 1993 Statute, and that Teefe could only be closed by Central Bank in consultation with the Minister. She also said that Nkangi’s letter was irregularly worded.

The Committee is still continuing with the probe and will compile its findings in a report that will be presented to Parliament. 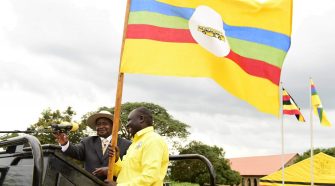