Journalists Mike Mutebi and Mayumba Kephers are currently being held at the Central Police Station in Kampala, after being arrested by Police on Monday.

The duo was traveling on boda boda, when traffic officers around Clock Tower suspected their cyclist to be a criminal and moved to arrest him.

Scuffle ensued as he objected the arrest, which prompted Mutebi to film events, a move that angered the officers and arrested them as well.

One of the top officials at Delta TV, Abbey Mukiibi, told SoftPower News that the journalists had since driven CPS and police had by press time, not explained the reason for the arrest.

“We are still here at CPS and waiting to listen to their (Police) communication on the issue,” Mukiibi said.

“Yes, it is actually me who ordered to have them brought here after being told of their arrest. We need to first understand the reason for their arrest,” he said.

Onyango adds that “if the issue is minor, they will be released.” 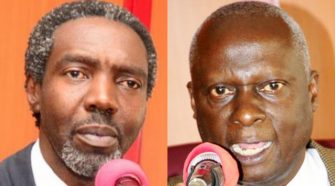