Over 50 youths affiliated to the NRM party were arrested on Monday after Police blocked them from accessing the precincts of Parliament to deliver a petition to the Speaker of Parliament, Rebecca Kadaga.

Police say the youths were arrested for holding an unlawful procession.

The youths, many of them wearing yellow attire with NRM wording attempted to access Parliament to deliver a petition in which they protest the recent debate in the British Parliament on issues relating to democracy, governance and rule of law in Uganda.

They say that the act by the British legislators to involve themselves in the internal politics of Uganda undermines Uganda’s sovereignty.

On Monday morning, a group of Police officers engaged in a physical altercation with the youths outside the gate of Parliament in Kampala as they insisted on meeting the Speaker. The group sang the national anthem as they resisted attempts by the Police to arrest their colleagues.

“We didn’t come here to engage in violence. What we don’t want is for the opposition to use foreigners to meddle in our affairs,” one of the youths told the press.

Another member said that the British harbor hidden motives which include exploiting Uganda’s natural resources.

Later, the Director for Communications at Parliament, Chris Obore met the youths outside the Parliamentary compound and was handed their document which he promised to deliver to the Clerk to Parliament and Speaker.

“They said their intention was to come and deliver their grievances to Parliament which I told them is their right,” Obore told reporters.

“But it’s very important even if you have discontent, to respect our own institutions. If we don’t respect our institutions, then it gives the other people [foreigners] the audacity to think that we can not govern ourselves and therefore they should meddle in our affairs,” he added.

The deputy spokesperson for Kampala Metropolitan Police, ASP Luke Owoyesigyire said that 50 people were being detained at Central Police Station (CPS) in Kampala.

“We have with us here at CPS over 50 youths for allegedly participating in an unlawful procession,” ASP Owoyesigyire said.

“So far, what we have done is inform them about the normal procedures on how they can approach Parliament. They can maybe get one or two people to represent them”.

Last week, some three NRM youths were arrested by Police outside the British High Commission in Kampala as they protested over the same issue.

Earlier in the same week, British MP, Dr Paul Williams of the Labour Party who was at the forefront of the contested debate said that his view and that of the British people was that the democracy and independence of the Electoral Commission in Uganda are undermined by the leadership of President Yoweri Museveni.

He said that the freedoms and rights of opposition politicians like Kyadondo East MP, Robert Kyagulanyi (Bobi Wine) have been abused and many of them tortured and harassed, saying that UK MPs as “friends of Uganda” needed a chance to discuss them.

Kadaga Vows to Expose Corruption, Atrocities Despite Threats Towards Her 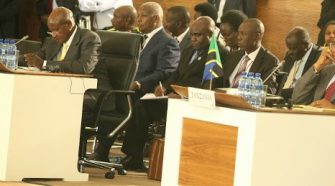