Government has declared July 10 a public holiday to allow Ugandans participate in the much anticipated elections to select new Local Council (LC) leaders at the village levels.

Next Tuesday, the Electoral Commission will conduct the elections for LC1 Chairpersons in 60,800 villages across Uganda.

Given the importance to which both government and the electoral body have attached to the elections which haven’t taken place in the last 15 years, a decision has been made to make the polling day a public holiday so as to avail Ugandans time to take part.

“The Hon Minister of Public Service informs the general public that Tuesday 10th July 2018 will be observed as a public holiday throughout Uganda,” a letter addressed to the Permanent Secretary in the Ministry of ICT.

The letter is also copied to the Executive Director, Uganda Media Centre, the Office of the Prime Minister and the Chief Editor of the national broadcaster.

Birakwate explained that the public holiday is meant to enable all Ugandans to participate in LC1 elections.

“We hope government will declare July 10 [polling day] a public holiday so that students and public servants can participate,” the E.C Chairperson, Justice Simon Byabakama had requested in May while announcing the roadmap for the elections.

The exercise began on June 22 with the registration of eligible voters who are residents in the new villages as well as those who missed last year’s registration and those who changed residence.

Nomination for candidates who seek to contest for LC1 positions was done on July 4 and 5 at the parish headquarters.

The nominated candidates are currently doing campaigning in their respective areas and the campaigns will close on July 9.

According to the E.C, polling will be conducted by lining up behind the candidates, their symbols or posters.

Program for the polling day will begin with the assembly and verification of voters by Village Election officials between 7am and 10am. This will be followed by voter education and briefing of voters on voting procedures which will end at 11am.

Between 11am and 11:30am, the eligible voters will form lines and afterwards be counted by the polling officials assisted by the candidates’ agents. The officials will use the time between 11:30am to 12noon to fill the necessary forms (EC10) and declare the Chairperson elect.

From noon to 4pm in the evening, the elected LC 1 Chairpersons will nominate their 6 person Executive Committees which will have to be approved by the electorate.

It is these committees from the respective villages that will then form the Parish Council that shall elect the LC 2 Chairpersons on July 27.

Yesterday, Justice Byabakama reiterated his call to all Ugandans to turn up in big numbers and participate in the elections which he said are “very fundamental”.

He said the LCs offer a platform for locals to escalate concerns to higher structures to influence policy, but are also critical in identifying and documenting residents, and ensuring security at grassroots.

He also said that the structures support the judicial systems in adjudicating local cases. 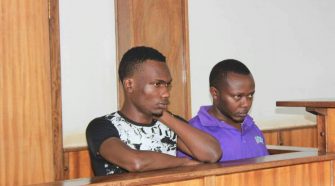