The Prime Minister, Dr Ruhakana Rugunda has dismissed reports alleging that  the Minister of State for ICT, Aidah Nantaba is out of the country seeking political asylum in Canada for fear of her life.

Kaginda noted that he has received information from a whistleblower claiming that Nantaba had flown out of the country since her life is under threat.

In response, the Prime Minister noted that the allegations are baseless since Nantaba is in Canada on official duties.

“Hon. Nantaba is out of the country officially on duty and I dismiss the information that the whistleblower has intimated. I authorized Nantaba on her request to attend to official duties,” Rugunda said.

It should be noted that since March, Nantaba has been absent from Parliament after surviving what she said was an attempted assassination targeting her. The incident that happened in March at Ggavu village in Kasawo sub-county along the Kayunga-Mukono road when gunmen intercepted her.

The Minister was reportedly returning to Kampala from Ndeeba village in Kayunga where she had spent the weekend.

Amos Lugoloobi the MP for Ntenjeru North who is also Nantaba’s elder brother said at the time that she (Nantaba) was approaching Ggavu trading centre when some strangers on a bodaboda stopped her. When she stopped, armed men with masked faces came from the bush and when she sensed danger she sped off,” Lugoloobi said.

The incident led to the shooting and murder of a one Ronald Ssebulime whom the Minister had alleged was a suspected assassin.

Sebulime was shot dead hand cuffed by officers of Police who were responding to an alert by Nantaba. She had reported that she was suspicious of the late who was following her car.

Police later admitted that Ssebulime was wrongfully killed by their officer.

“It is true that the deceased was removed from the police pickup and instantly shot dead by our officer. We have arrested the car commander and 2 crew members for trying to conceal the true facts of the events surrounding the killing of Sebulime,” Fred Enanga, the Police Spokesperson said in a statement in March.

Nantaba has since snubbed both Police and Court summons on claims that she was ordered by the President to stay in her home until the President orders otherwise.

It’s Tumukunde’s Actions that Will Count, Not His Words - Bobi Wine

2 months ago
News in Pictures 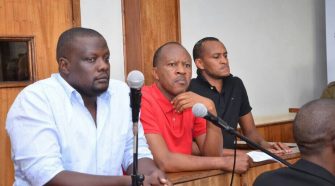