Sheilah Gashumba is deep into yet another controversy, this time about a photo of her that was taken at a hangout in Kampala, and according to her, the restaurant used it for commercial purposes without her consent.

The photo in question was taken at La Paroni’s Choma Point restaurant where Gashumba had been guest recently.

Later, according to the TV host, her photo was posted on the restaurant’s social media platforms. The reason she is ranting is - the photo containing her image also contained company logos. And to her, that passes as using her image for advertising purposes.

“Lol!! It’s only in Uganda where you spend 3 days pleading with people to delete your own photo full of company logos off social media!! You have to plead, beg and ask until you can’t no more and all you are left with is to have other stronger parties involved!! Smh,” Sheilah tweeted on Sunday.

“It’s only a photo when it’s only my face or body there, but with three company logos and the same photo promoted on Facebook!! No honey!! That’s an advert,” she later wrote in a subtweet.

She also posted a screenshot of her WhatsApp conversation with one of the staff at La Paroni’s saying “I don’t like it when my photos are posted without my permission, I have a brand to protect”. Sheilah asked that the photo be taken down.

The NTV Uganda host has said she is suing the restaurant for refusing to delete the photo. They have only been rude, arrogant, she said.

The reaction from the online audience has been divided. Some fault Sheilah for posing for the photo, which would then imply she had consented to it being taken. Others said she is over reacting since other celebrities have been in the same position and not made a fuss of it.

But others say even if she posed for the photo, for another party to use it for commercial intents, requires her permission. They argue she has invested a lot in her brand for anyone to exploit it with disregard of her rights.

On Tuesday, the restaurant posted several photos of various celebrities while hanging at La Paroni’s with a caption; “It’s GOD’S PLAN that some brands are bigger than others… Did you know that Drake Gave Away $1 Million to Miami Community in ‘God’s Plan’ Video… Source CNN”. The post seems like a veiled jab at Sheilah.

SoftPower News could not reach the restaurant through its public telephone contacts for a comment, as they could not pick.

In Wake of COVID-19, MultiChoice Eases Accessibility of News Channels

Parliament Orders 3 MPs who Returned from Dubai to Undergo Quarantine

Uganda Confirms 8 New Cases of COVID-19, All Were Travellers from Dubai 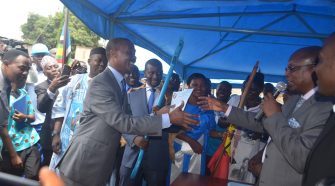