A South African magistrate, Mashiane Mathopa ruled on Thursday that the killers of former Rwandan Intelligence Chief, Patrick Karegyeya are “well known”. She based on a testimony from South Africa’s special investigative unit, the Hawks, which indicated that Karegyeya’s murder was “directly linked to the involvement of the Rwandan government.”

Karegyeya who fled Rwanda in 2007 after falling out with the country’s leader, Paul Kagame, was assassinated in a hotel in Johannesburg, South Africa on December 31, 2013.

At the opening of the inquest into his murder on January 19 this year, the lawyer representing Karegyeya’s family, named four suspects in his murder including Appollo Ismael Kiririsi, Samuel Niyoyita, Nshizirungu Vianney and Alex Sugira, all Rwandan nationals said to be living in Rwanda and still at large.

But when asked by the magistrate to explain what steps it had taken to secure the arrest of the four suspects in the past five years, the Hawks investigating officer, Kwena Motlhamme said Karegteya’s murder, along with several attacks in Johannesburg on Rwanda’s exiled army chief of staff Gen Kayumba Nyamwasa “were directly linked to the involvement of the Rwandan government”.

He said Rwanda and South Africa don’t have an extradition treaty and this according to him, made it very impossible for any attempt to locate the suspects from their country of origin.

After the 20-minute inquest in Johannesburg, the magistrate Mashiane Mathopa said the suspects were “well known” and that there was a prima facie case to answer and he was sending the matter to South Africa’s National Prosecuting Authority (NPA).

After Karegyeya’s death, reports indicated that he had gone to attend a meeting at the hotel when he was murdered.

The circumstances leading to his death remain unknown, but the Rwandan opposition party he started together with another Rwandan dissident, Kayumba Nyamwasa, the Rwanda National Congress (RNC) claim “he was strangled by agents of (Rwandan President Paul) Kagame,” having previously survived several assassination attempts.

Prior to his death in 2010, Karegyeya had told the Observer newspaper, that Kagame was a dictator who would not leave power unless he was forced out by war.

According to South African press, when confronted on the matter, Kagame denied responsibility, but added that “I actually wish Rwanda did it. I really wish it.”

“You can’t betray Rwanda and not get punished for it. Anyone, even those still alive, will reap the consequences. Anyone. It is a matter of time.”

Kagame has ruled Rwanda since 1994, but his opponents accuse him of dictatorship as well as aiding murder of his dissents in their host countries. 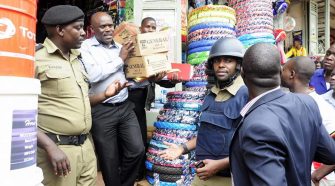