Police has revealed the identities of six people who were arrested in connection to the chaos that ensued last week Friday at Buganda road court during the sentence of academic and researcher, Dr Stella Nyanzi.

Police spokesperson, CP Fred Enanga says these were arrested due to their disorderly conduct which intended to impede, disturb and disrupt the orderly conduct of the court process.

The apprehended include Zaina Abarinabyo who is alleged to have hurled a water bottle which hit the Magistrate, Gladys Kamasanyu in the face.

The other suspects are Wandera Simon, Waiswa Abdullah, Katumba Wesonga, Ojebilia Augustine and Kabali Joel. The five are accused of loudly objecting inside the court room as the Magistrate was reading the sentence.

Dr Stella Nyanzi, a political activist and strong critic of President Yoweri Museveni was sentenced to 18 months in prison after being convicted of cyber harassment.

The magistrate said that her sentencing was based on the fact that she (Stella Nyanzi) is unrepentant and that cyber harassment is on the increase in the country.

As part of her protest, Nyanzi refused to listen to the sentence and revealed her breasts to court, shouting on top of her voice as she swung her breasts.

Stella said they brought her into the dock in prison to listen to her sentence, against her will.

After the sentence, the huge numbers of people in the court room resorted to singing and shouting in an attempt to console the convict which made it hard to listen clearly to the magistrate’s last words.

In the process, an unknown individual threw a bottle to the magistrate prompting her to prematurely leave the court room.

Police made some arrests in the court room.

On Monday, Enanga told reporters that Police has retrieved the CCTV footage in and outside the court room to establish which individual was responsible for what.

He said this will also help identify suspects who are still at large, for probable prosecution.

“This is to send a message that this kind of disrespectful conduct in our court rooms is punishable,” the Police spokesperson said.

“For now, we are processing them for criminal contempt of court where we expect them to appear anytime. We are also looking at additional charges of assault upon getting a medical form from the victims in court”.

“As Police, we condemn such acts that put the lives of our judicial officers in danger. Court rooms are special public forums which draw power and legitimacy from lawful and mutual respect of the juridical process”.

Enanga said that where there are acts of hooliganism and political theatrics aimed at purposefully disrupting judicial proceedings, Police will swing in to ensure there is respect for the law.

Following the incident, Police has heightened security screenings at the court premises and inside courtrooms. Those entering courtroom will not be allowed to enter with bottled beverages and party colours.

Murdered MAK Student Was Half Naked and Threw Stones at our Officers, Says Police 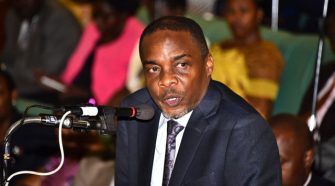