Tear gas rocked Mutoto cultural grounds in Mbale district on Friday afternoon as police battled hundreds of people who had gathered for the launch of the traditional Bamasaba Circumcision alias Imbalu.

Police deployed at the cultural grounds to stop the launch for violating the ban on social gatherings due to the Covid19 prevention guidelines.

Hundreds of people stormed the cultural grounds to witness the circumcision of five boys to kick start this year’s Imbalu calendar.

Police tried to stop the group from conducting the Circumcision by firing teargas in vain.

The angry revelers castigated police for trying to foil their activity despite observing the social distancing guidelines issued by Health Ministry to stop the spread of the Corona virus disease.

Magidu Mudebo, the coordinator of surgeons in Inzu Ya Masaba Cultural institution, says they engaged the leadership of the cultural institution and thought that they had secured permission to go on with the ceremony.

Rogers Taitika, the Elgon Region Police Spokesperson, says more than 10 people were picked up including Emma Watundu, a minister in Inzu Yamasaba for disobeying presidential directives.

Police was still in running battles with some of the residents by the time of filing this story.

16 hours ago
News in PicturesPeople 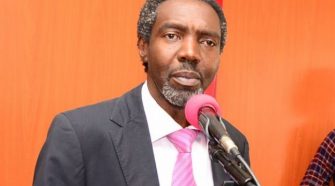