A floating island measuring 1.5 acres which was threatening to block the Nalubaale hydro power dam in Jinja has been flushed out without causing damage to the dam.

Teams from the Ministry of Agriculture, ESKOM and Uganda Electricity Generation Company Ltd (UEGCL) led the exercise to clear the sud.

An official from the Ministry of Agriculture said the latest island was cited advancing towards the dam in Jinja on the night of July 15.

Joint technical teams from the Ministry of Agriculture, Animal Industry and Fisheries (MAAIF), ESKOM and UEGCL responded and successfully cleared the sud.

In order to protect the Nalubaale plant equipment while ensuring power generation, a team was deployed to divert the floating island to Kiira power plant. The island was let out through the Kiira spill way gates.

To enable this happen, all the units at Nalubaale were switched off and load was shifted to Kiira, which partly interrupted power supply.

On Thursday, Pius Wakabi, the Permanent Secretary in the Ministry of Agriculture led a tour to supervise the progress of the control operations in Jinja.

“I would like to recognise the strong collaboration and teamwork exhibited by the engineers, technicians, fisheries research officers and other experts from MAAIF, Eskom and UEGCL in delivering these results and protecting the dam,” Wakabi said.

Teams have been monitoring parts of the River Nile that are adjacent to the dam. The same will be done for Bujagali and Isimba dams.

Increasing water levels in Uganda have led to many floating weeds; some in form of floating islands and commonly referred to as suds which affected Nalubale hydropower dam, some bridges and landing site infrastructure in different parts of the country.

NRM to Elect Flag Bearers by Lining Up, Presidential Candidate to be Picked by Circular Resolution 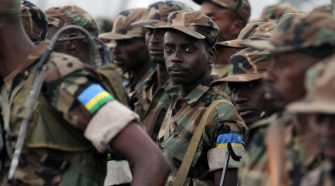