Fish traders under the Uganda Fish Maws Traders Association (UFTA) have Wednesday petitioned the Speaker, Rebecca Kadaga demanding Parliament to intervene and halt the illegal operations of the Fishing Protection Unit against fisher men. The Unit is headed by Lt Col Nuwagaba.

There have been several reports of UPDF officers under the Fisheries Force carrying out operations against fishermen that have pushed many out of business by subjecting them to torture and confiscating their products.

The fish maws traders state that currently they are being barred from trading in fish maws yet their foreign counterparts are allowed to trade in the same.

Fish maw is the commercial term for the dried swim bladders of large fish like croaker and sturgeon. It has has no fishy taste and absorbs the flavors of other ingredients. For the Chinese, it is considered one of the big four delicacies of the sea.

Led by the Association Secretary, Charles Tebandeke the group has demanded that the force be halted from carrying out such operations.

Tebandeke informed the Speaker that they were being denied their right to trade in fishmaws yet they pay licenses to deal in the entire fishing business.

“It is stated in the statutory instruments and the fish Act called License for artisanal processing of fish and fishery products; the license is to support small scale businesses to deal in any kind of fish activities including dealing in fish maws,” Tebandeke said.

“Unlike us, our dear foreign investors are issued the similar license but dealing on large scale; the officers are forcing us out of dealing in fishmaws only allowing foreigners dealing in the same.”

The Minister of Agriculture, Vincent Sempijja admitted that dealing in fish maws is a new business that had not been envisioned by government but says they are going to come up with guidelines to manage the business.

“As far as the Ministry is concerned, we have no intention of pushing our people out of any business in anything not only fish maws; originally the fish maws issue wasn’t known to government but fall under other fish products,” Ssempijja said.

Kadaga assured the traders that Parliament will stand with them and ensure that the industry is streamlined.

“As parliament we shall not be part of any treatment that enriches foreigners at the expense of Ugandans,” Kadaga said.

List of Ugandans to Travel Home Aboard Ethiopian Airlines, ‘Marks the Start of Evacuation,’ Opondo Says 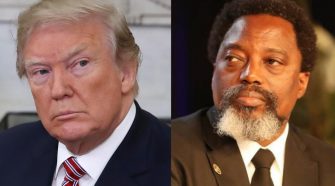