Government through the Ministry of Finance, Planning and Economic Development is seeking the approval of Parliament to spend Shs 280 billion to purchase two Bombardier jets from Canada this month in an ambitious move to revive the national carrier, Uganda Airlines.

This was revealed Wednesday by the Minister of State for Planning, David Bahati while he presented a supplementary Schedule Two of the financial year 2018/19.

Bahati told MPs sitting on the committee on budget the supplementary proposal is in line with Section 25 of the Public Finance Management (Amendment) Act, 2015. He said the Supplementary Schedule 2 has been prepared amounting to Shs 1.17bn of which Shs 403.5bn has already been authorized within the 3 percent legal requirement and Shs 770.2bn requires prior approval by Parliament.

Bahatai noted that among the items that are to be financed once Parliament approves the supplementary include catering for financing costs of the Uganda national airline at a cost of Shs280bn.

Bahati said the funds are needed to facilitate the delivery of the two jets to enable the national airline start operations.

The funds have been obtained from proceeds out of the MTN license renewal and capital gains tax from the oil and gas sector, he said.

“The payment of the first delivery of the two Bombardiers is required to be cleared within the next 10 days,” Bahati informed legislators.

Last month, the first of Uganda Airlinesâ€™ four new Bombardier jetliners underwent a flight test in Canada where they are being manufactured.

The CRJ900 mid-range planes are being manufactured by Canadian based leading multinational aerospace and transportation company, Bombardier Inc.

During the same event, Bagenda and Eric Schulz, the Airbus chief commercial officer signed a memorandum of understanding with Airbus for two A330-800s worth USD 586 million.

Initially, the delivery of the four Bombardiers (flying regional routes) was set for end of 2018, however, this timeline was pushed forward to March 2019 by Cabinet.

Government now believes that the revival of the airline will significantly boost Ugandaâ€™s trade in the global market, facilitate travel as well as tourism.

Meanwhile, Minister Bahati told the committee of Parliament that the supplementary will as well be used to enable the Ministry of Lands cater for land compensation to Buganda kingdom at a total of Shs 3bn.

Bahati added that the supplementary will as well facilitate State House to cater for purchase of Okello House at a sum of Shs 10bn while an additional Shs5bn to will go to the Ministry of Justice for representation of the country in the case against DRC and the termination of the RVR concession.

PHOTOS: The New Kasubi Market Completed, Roadside Vendors to be Relocated in 2 Weeks 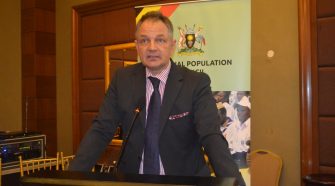