Opposition Forum for Democratic Change (FDC) has appealed to government of Uganda to explore all relevant avenues for dialogue so as to mend relations with neighboring Rwanda.

Addressing the media on Monday, the FDC party spokesperson, Ibrahim Semujju Nganda noted that by the look of things, the country might be at a brink of war with Rwanda yet the citizens are being kept in ignorance by the authorities.

Semujju said that the country is so much concerned with the war drums that were sounded by the Commander of the Special Forces Command (SFC), Maj Gen Don Nabasa.

The leading opposition party quoted Nabasa as having made statements on February 12, regarding external forces which are threatening Uganda’s security by use of money and agents in an attempt to destabilize the country.

“External forces are looking and they don’t want us to develop. We have the oil here, beauty of the country, stability, development and above all a precious leader. They think maybe if they get the precious leader out, there will be disorganization. Please don’t go on that path, it’s a wrong path. Don’t let them use you,” Semujju quoted Nabasa as having said.

“They won’t come physically but if they come here, it will be the best because we are very ready for them. Unfortunately, they will not come. They will send money and people, like the ones of late being deported, to mobilize the youth because they have the manpower here and the youth are very easy to convince. Please talk to them and they see that the stability of their country is their future,” Semujju further quoted Nabasa.

“This statement by Don Nabasa is even given more weight by a similar one made by Museveni while addressing the Tarehe Sita function in Kitgum. Museveni said, ‘Nobody can disturb our peace. Anyone who thinks of destabilizing Uganda will destroy themselves…… UPDF is strong and well equipped to secure Uganda from many forces of destabilization’,” Semujju told reporters at Najjanankumbi.

The FDC spokesperson asked that the President and the SFC commander tell the country whether there is an impending war between Uganda and Rwanda.

“We are at the brink of war with Rwanda. What is the cause of all this? Tension between Uganda and its neighbors has a lot of ramifications,” Semujju further said.

He cited the failure by Museveni last year to attend the Africa free-trade area summit in Kigali and a similar move by Rwanda’s Kagame when he snubbed the East African Community (EAC) summit in Kampala.

“At this time, Rwanda was accusing Uganda of harassing its citizens and Museveni had just arrested senior police officers for facilitating illegal extradition of refugees to Kigali,” Semujju explained.

He added that, “Procurement of military hardware and training should not excite soldiers into war, we should pursue dialogue and peace with neighbors and everybody. We must also pursue dialogue with all our perceived enemies”.

From Bwindi to Sipi Falls, Uganda is Breathtakingly Beautiful - Museveni 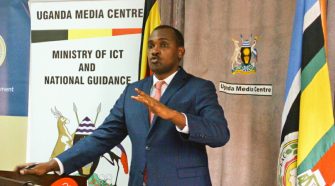