The alleged torture of suspects including MPs as well as brutality against journalists and the lack of freedom of expression in Uganda have been cited by Human Rights Watch (HRW) among the rights violations that characterized the year 2018.

On Thursday, the international rights watchdog released the annual Human Rights Watch Report which summarizes key human rights issues in more than 100 countries and territories worldwide, drawing on events from late 2017 through November 2018.

While launching the report in Berlin, Germany on Thursday, the HRW Executive Director, Ken Roth said that contrary to the previous years where the autocrats have been capturing the headlines, last year, it was the defenders of human rights, democracy and the rule of law that gained strength.

“The populists who spread hatred and intolerance are spawning a resistance. The excesses of autocratic rule are fueling a counterattack,” Ken Roth said.

He said that “to make matters worse, some governments have taken advantage of this trend to commit mass atrocities, including in Syria (against civilians in anti-govt areas), Myanmar (against Rohingya) and Yemen (where the Saudi-led coalition is bombing and blockading civilians)”.

Nonetheless, Roth says that what was impressive over the past year was the considerable pushback that this authoritarianism prompted.

In the case of Uganda, the report captures the allegations of widespread repression and intimidation of parliamentarians that characterized the process of passing the controversial constitutional amendments in 2017.

The report also cites “violations of rights to freedoms of association, expression, and assembly persisted, as security forces beat and at times, tortured and arbitrarily detained protesters, journalists and opposition members” in Uganda.

Also contained in the 674 page report are the incidents of brutality against journalists and other civilians by security personnel in Uganda.

“Despite various government commitments to hold security forces accountable for their conduct, many investigations into military and police abuses of civilians failed to progress, including into the November 2016 killing of more than 100 civilians in Kasese, western Uganda, and the killings of protestors in September 2009 and April 2011,” the report reads in part.

On the curtailment of freedom of expression and assembly, the controversial taxes on the use of social media as well as Mobile Money in Uganda last year, were particularly noted in the report.

“At a protest march against the tax in Kampala on July 11, Police fired live bullets and tear gas to disperse the demonstration which the police deemed “illegal.” Protestors argued the tax violated Ugandans rights to free expression and information,” states the report.

It also captures the banning by security officials in Kitgum district of a song by musician Bosmic Otim that was critical of government officials for being “misleading” and “inciting violence.”

The song criticized four parliamentarians for allegedly being sycophants of government and unresponsive to citizens’ problems in northern Uganda.

Concerning press freedoms, HRW points out the arrest by security operatives of journalists Herbert Zziwa and Ronald Muwanga during the Arua saga. The report also highlights the beating of and detention of  Reuters photojournalist James Akena during riot in Kampala, as well as the arrest of eight journalists whose equipment was confiscated while they covered Bobi Wine’s return from the U.S.

“Despite the military’s stated commitment to investigate soldiers for beating journalists, no one had been held accountable at time of writing”. 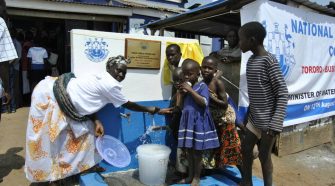