Two Ugandans have dragged the Uganda Revenue Authority (URA) together with three telecom companies (MTN, Airtel and Africell) to court seeking to have these entities refund moneys erroneously deducted from Mobile Money users since the new taxes were implemented.

On July 1, government effected amendments passed by Parliament which saw users of Mobile Money charged a levy of 1% on sending, receiving and depositing money.

However, President Yoweri Museveni would soon clarify that the tax on personal deposits was an error and that the levy on other transactions was supposed to be 0.5% not 1%.

Unfortunately, many people had already paid the erroneous taxes which prompted queries on whether the tax collector (URA) would refund these moneys.

It is upon this background that two concerned citizens; Turyakira John Robert and Odur Anthony have sued URA along with MTN, Airtel and Africell.

In a civil suit filed in the High Court, the two applicants seek an order commanding URA and the telcos to refund all money collected as tax on Mobile Money deposits. They also want court to restrain any future erroneous taxation or collection and enforcement of taxes in any mobile money deposits.

They contend that the erroneous taxation was a violation of depositors’ fundamental right to property which is guaranteed in Article 126 of the Constitution.

“The said taxation on deposits was erroneous, and an expropriation of the monetary property of every target of the said taxation,” the applicants stated.

“While the erroneous taxation was instantaneous, the possibility of refunding the said monetary property is uncertain as no visible preparations to do so have been demonstrated by the same”.

They say that the conduct of both URA and the telcos was not only erroneous and wrong but also illegal, unfair and unreasonable.

Turyakira and Odur argue that there is no legal basis upon which the respondents continue holding onto the property of those who deposited mobile money since July 1.

Yesterday, President Museveni said that those people who were affected by the wrong deductions will be reimbursed.

UCC to Effect Ban on Airtime Scratch Cards on July 31 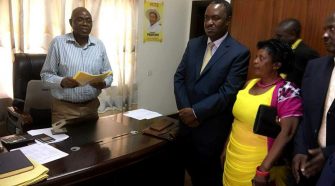