The Governor of the Bank of Uganda, Tumusiime Mutebile while appearing before the Parliamentary Committee on State Authorities and State Enterprises (COSASE) together with his Deputy, Louis Kasekende, made a case for the grounds on which the Central Bank closed a total of seven defunct commercial banks.

Below are the remarks of Governor Mutebile to the committee of Parliament.

The Management of the Bank of Uganda are here in response to your invitation to appear before COSASE on issues raised in the Auditor General’s Report on Defunct Banks.

I bring apologies from the Board Members, who have not been able to join us today due to other engagements.

In conducting the supervisory role, the primary objective of the Bank of Uganda is to ensure the stability and soundness of the banking system and protection of depositors’ interests.

While performing this role, there is a possibility that a financial institution may run into problems. In such circumstances, the Financial Institutions Act 2004, prescribes the type of actions the Central Bank should take in the different circumstances. They include; issuance of directives on corrective actions that the financial institutions must comply with, placing the Institution under statutory management or receivership and/or liquidation, depending on the nature of the problem.

The 7 defunct banks in the Auditor General’s Report were put under resolution largely due to insolvency problems. In conducting bank resolution, the Central Bank is mindful of the need for the depositors to access their funds in the shortest time possible, keeping the cost of resolution low but also most importantly the need to protect the remaining part of the banking industry from any contagion effect or systemic shocks.

While carrying out bank resolution, in a number of cases, the Central Bank identified other banks that purchased the assets and assumed liabilities of the banks under resolution. The decisions and actions of selling the assets of banks placed under resolution, were based on the objectives of protecting the depositors’ funds, increasing confidence in the banking system and fostering financial sector stability, which is the core reason for our existence as an Institution.

Please note that over the years, Bank of Uganda ensured that the bank resolutions were conducted seamlessly without causing instability in the financial sector and protecting the interests of the depositors.

I would like to re-emphasize to this Committee and the public that the principal objective of financial regulation is to maintain stability and soundness of the banking system. This would greatly be undermined if there is erosion of confidence in the key stakeholder i.e. the Depositors. Indeed in the ranking of claims in an insolvency of a financial institution, the Deposit Protection Fund ranks first, next, is the liquidator’s expenses, then the wages of employees of the institution. These are followed by the secured creditors, then unsecured deposits, followed by other types of creditors.

It is only and only if, there are residual assets, that the shareholders get anything since they rank at the very bottom of the distribution order.

Honourable Members; resolution of banks is a complex exercise and each bank being resolved has its own unique circumstances. There are a number of challenges encountered during resolution. One of the main challenges is litigations by the different stakeholders. There have been several court cases against banks under resolution spanning many years.

The other challenge in bank resolution relates to the difficulty in collecting and recovering of loans due to encumbrances placed on the collaterals, unsecured and poorly documented loans. There are also delays that result from the requirement to verify creditors and their claims particularly for those banks with poor documentation. This may also apply to the depositors. All these challenges have had implications on the timeliness of bank resolutions.

Notwithstanding the challenges, we would like to assure you that progress is being made to conclude bank resolutions. In addition to paying off the depositors, we have twice paid the creditors of Cooperative Bank, Greenland Bank and International Credit Bank from the proceeds of the liquidation on a pro rata basis.

Furthermore, in September this year, we made a final call on the creditors of Greenland Bank, Cooperative Bank and Global Trust Bank in liquidation, to settle claims.

We also continue to pursue the pending court cases that are currently affecting the conclusion of the resolution of some banks.

We appreciate the heightened interest in matters surrounding the resolution of defunct banks, but our hands are tied and Bank of Uganda has to operate within the law.

Our appeal to the Committee is that as you engage us, be mindful of the ongoing court cases, which have implications on how much information we can divulge on the affected banks.

Thank you for listening to me. 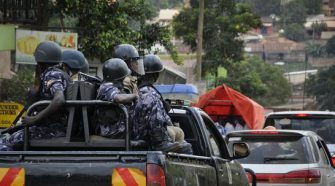