Governor of the Central Bank, Emmanuel Tumusiime Mutebile has said that contrary to the popular narrative that the failed commercial banks were distressed due to the poor supervision of Bank of Uganda, it was the bad management that resulted into the closures.

Mutebile said the push factors behind the demise of these banks included insider loans to directors and related companies, mismanagement, misreporting, liability-asset mismatches, and under-capitalization among others.

He was speaking in Fort Portal recently during a town hall meeting organized by Bank of Uganda in the Western district of Kabarole.

The town hall meeting was in line with the Bank’s Strategic Plan 2017-22, which prioritizes public engagements.

Mutebile used the meeting to comment on the recent Parliamentary probe into the manner in which Bank of Uganda handled the closure of seven defunct banks.

The investigation led by the Committee of Commissions, Statutory Authorities and State Enterprises (COSASE) focused on the closure of Teefe Bank in 1993, International Credit Bank Ltd in 1998, Greenland Bank in 1999, The Co-operative Bank in 1999, National Bank of Commerce in 2012, Global Trust Bank in 2014 and Crane Bank Ltd to DFCU in 2016.

“Contrary to the negative coverage about the central bank during the Parliamentary probe into closed banks recently; I can confidently say that none of the failed banks in our past came to its end, because of the failure of supervision by the central bank,” he said.

He said “bad loans that were not fully serviced or that went unpaid entirely resulting in losses” were another cause for the distress of the said banks.

“It does not please me to say that Uganda has had too many cases of banks that have not always acted in the best interests of their shareholders and customers; often imposing financial costs to the taxpayers as the Government took measures to protect innocent citizens of failed banks,” he said.

Nonetheless, Mutebile says the Central Bank responded to the bank failures by “reforming the supervision and regulatory framework so as to identify and impose prompt remedial action ahead of time”.

As a result, the more recent cases of distressed banks were resolved while preserving depositors’ money and maintaining their uninterrupted access to banking services, as well as securing the stability of the financial system overall, the Governor added.

Commenting on the current state of the banking sector in Uganda, Mutebile said that the sector is “strong and healthy”.

He attributed this to the BOU’s outstanding role in regulation of financial institutions which he said has earned it credit across the African continent.

“The failure of locally owned banks is a problem that should keep many people awake at night until Ugandans master the professional skills, knowledge, and attitudes that are required by the banking industry so as to unlock the power of finance in making our communities prosperous,” he said. 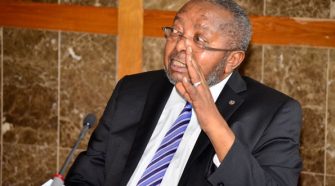 Central Bank Backtracks on its Position Against 0.5% Mobile Money Tax