The Uganda Law Society (ULS) is asking that security agencies expedite the investigations into the incident in Mukono where a female Police officer was assaulted by security guards of Maj Gen (Rtd) Matayo Kyaligonza, short of which the laywers’ body will prosecute the accused individuals.

Police Sergeant, Esther Namaganda, a traffic Police officer was over the weekend allegedly assaulted and manhandled by body guards of Gen Kyaligonza.

The incident happened in Seeta Mukono, where the armed men attached to Military Police are reported to have manhandled Namaganda who was on duty. The victim says she had stopped the car after it made a wrongful turn, in violation of the traffic regulations.

She says the driver objected to her advice and thereafter, two military officers came out of the vehicle and insisted that they wanted to continue through the way she said was wrong.

The two soldiers indentified as L/Cpl Bushindiki Peter and Pte Okurut John Robert were both arrested on Sunday by the UPDF and the military apologized to the Police officer for the “regrettable” incident.

In a statement issued Monday, Simon Peter Kinobe, the President of ULS said the lawyers were “deeply concerned” by the pictures and videos circulating online showing the soldiers assaulting Sgt Namaganda.

Even though ULS acknowledged the fact the both Police and the UPDF have stated that they are already investigating the alleged assault, it (ULS) says it is also carrying out private investigations on the same.

And the lawyers’ body has appealed to members of the public with information that can benefit the process to come forward and provide it.

“We understand investigations into the matter are currently ongoing and Sgt Nmaganda has undergone medical examination. UPDF has also confirmed the arrest of the two military police officers at the center of this criminality,” Kinobe said in the February 25 statement.

“As ULS, we are also carrying out private investigations into the matter. We encourage eye witnesses and anyone else with information leading to successful prosecution of this case to approach our offices in confidence and share with us”.

ULS has guaranteed the witnesses protection through its “robust witness protection measures” which will ensure the witness identities are safeguarded and the information shared kept confidential.

“We also call upon UPDF and the Police to expedite the investigation because there is already ample pictorial and video evidence about the incident. We hope that Maj Gen Kayaligonza will do the same because this is a public interest matter that touches the core of law enforcement in the country and equality before the law”.

Kinobe said that ULS will continue to monitor the developments during the investigations “and if no satisfactory action is taken, the ULS will not hesitate to bring prosecution against all the parties involved” and “seeking available remedies as per the laws of Uganda. We reiterate that impunity has no place in a democratic society.

The statement comes after Police said Kyaligonza will be summoned to record a statement concerning the incident.

He also said two task teams headed by the Kampala Metropolitan Police (KMP) traffic Commander and the other by the CID Commander for KMP are following the matter up.

The KMP Traffic Commander team will probe the conduct of the driver who abused traffic rules while the CID will investigate the allegations of assault against a traffic officer which tantamounts to wrongful obstruction of an officer on duty.

“These two teams will work jointly with the CMI to investigate the 2 soldiers who were arrested on Sunday,” Enanga said.

“As a matter of protocol since the General is mentioned, the team through Police leadership calls for the summoning of Ambassador Kyaligonza through the Ministry of Foreign Affairs, on probable charges of assault and wrongful obstruction of an officer on duty,” Enanga said.

“Because our officer claims she was slapped twice by the Gen which obstructs an officer from doing her work”. 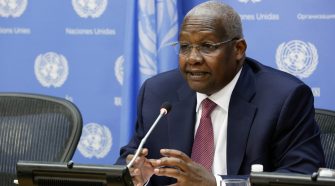