The Minister for Finance, Matia Kasaija has outlined measures being taken by the government to ensure that its external debt stock is sustainable, among them boosting the country’s exports so as to reduce the trade deficit and generate foreign revenue required to effectively service external loans.

Minister Kasaija said this while responding to the Auditor General’s recent report which highlighted an increase in the country’s debt by 22% from Shs 33.9 trillion as at June 2017 to Shs 41.5 trillion as at 30th June 30, 2018.

Auditor General, John Muwanga said that although Uganda’s debt to GDP ratio of 41% is still below the International Monetary Fund risky threshold of 50% and compares well with other East African countries, it is unfavorable when debt payment is compared to national revenue collected.

The same report warned that Uganda risks failing to pay off the increasing debt since there are very stringent conditions attached to the loans offered.

“These conditions include; waiver of sovereign immunity by government over all its properties and itself from enforcement of any form of judgment, adoption of foreign laws in any proceedings to enforce agreements, requiring government to pay all legal fees and insurance premiums on behalf of the creditor,” he said.

While addressing a news conference in Kampala on Tuesday, Minister Kasaija said Uganda’s debt is sustainable, and is projected to remain sustainable in the medium to long term. As at end of June 2018, Uganda’s external debt disbursed and outstanding accounted for 67.2% (USD 7.2 billion or UGX 27,939.9 billion) while domestic debt contributed 32.4% to total financing (USD 3.5 billion or UGX 13,386.2 billion).

“The debt levels are comfortably below the international sustainability thresholds (e.g below 50% debt to GDP ratio) beyond which debt starts getting unsustainable, and are significantly below the sub-Saharan average (45.4% debt to GDP),” he said.

Kasaija stated that Uganda compares very favorably with peer countries, “because most of our debt has been contracted on concessional terms, unlike other countries in the continent who have contracted a lot of commercial debt like Eurobonds”.

He assured the country that the investments (especially infrastructure) that Uganda’s debt is financing, will boost the country’s capacity to service its debt obligations.

“Government will continue to invest in export-oriented areas to boost exports in order to increase foreign exchange inflows and also enable servicing of external debt. It is therefore pleasing to announce that we are already reaping the dividends of these interventions, as a result, Uganda recorded a positive trade surplus in the region of USD 471 million for the fiscal year 2017/18,” he said.

In his report, the Auditor General pointed out the low absorption rate in the utilization of the acquired loans, some as low as 10%. The report cited an example of the USMID project where over Shs 95bn (95%) was still on the various accounts of Municipal Councils by close of year.

But Kasaija says government will ensure improved loan absorption by strictly adhering to the loan approval processes i.e. project preparation, negotiation and approval. He added that selective and strategic financing options are being taken to minimize financing risks with preference given to concessional financing, and commercial borrowing with low interest rates.

In a bid to expand the revenue base, the Minister revealed that starting next financial year, government will start implementing the new comprehensive Domestic Revenue Mobilization Strategy (DRMS), which aims to raise the revenue to GDP ratio to at least 16% in the next 5 years. 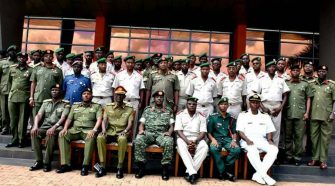